“Put this in your purse. Do not leave it lying around the house or yard.” 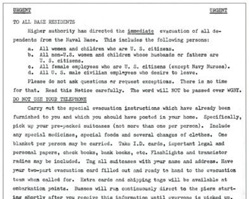 On October 22, 1962, Janet Miller received this one-page set of typewritten instructions for the evacuation of military dependents from Guantánamo Bay naval base (GTMO) in the midst of the Cuban Missile Crisis. Janet and her children, along with the other dependents living at GTMO at the time, were told by an unspecified “higher…