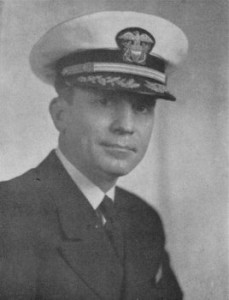 “Strictly speaking, the written accent on the second syllable (Guantánamo) is required to indicate the proper Spanish pronunciation. To Americans this is unnecessary. In the half century of United States occupancy, the accent has disappeared. Guantanamo Bay is in effect a bit of American territory, and so it will probably remain as long as we have a Navy, for we have a lease in perpetuity to this Naval Reservation and it is inconceivable that we would abandon it.”
– U.S. Navy Rear Admiral M.E. Murphy in The History of Guantanamo Bay, 1953

When Marion Emerson Murphy wrote these words he was a high ranking officer stationed on the U.S. Navy base in Guantánamo Bay, and had set out to write an “authoritative history” of the site from the arrival of Columbus to the “modern times” of 1953. The History of Guantanamo Bay remains an important document on inter-American relations during the Cold War period for its vivid––often idealized––portrayals of life on the base, and for its paternalistic representations of Cuban history as hopelessly dependent on American intervention.

Murphy tells a story of Guantánamo that ignores Cuban struggles to realize political and economic agency, preferring to portray U.S. sailors and military officials as courageous protagonists who commandeer history. More nuanced representations of Guantánamo––such as historian Jonathan M. Hansen’s insightful book, Guantánamo: An American History––integrate previously under-represented voices from across the Caribbean and document the gritty realities of living on the base before the communist revolution.

While Hansen examines the base at Guantánamo from its establishment in 1903 to its present use in the War on Terror, his history is particularly compelling from the 1920s to the early 1950s––when the booze-soaked outpost was filled with lascivious young sailors, many of whom pursued prostitutes in nearby towns and transmitted venereal diseases. The reader is also confronted with convincing evidence on Guantánamo’s strategic importance for Washington in its conflict with Havana and Moscow during the Cold War and in its ongoing political project to fortify global hegemony.

That M.E. Murphy’s work is the only history the public affairs staff of the Guantánamo Bay Naval Station will disseminate on the base’s official webpage reflects more than an affinity for jejune navy mythology, it demonstrates that U.S. paternalism and exceptionalism are as resilient as ever.

Nathaniel Rojas is a researcher for the Guantánamo Public Memory Project.