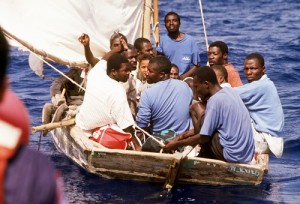 Haitian refugees watch from their crowded sailboat as a U.S. Coast Guard vessel approaches. Nearly 15,000 Haitians have been intercepted and brought aboard Navy and Coast Guard ships between October and December 1991. They are then transported to Naval Station, Guantanamo Bay, Cuba, for temporary housing until their legal status has been determined.