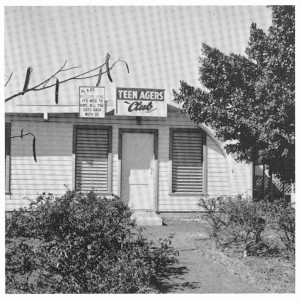 The most interesting fact I learned about GTMO was the presence of family and their daily lives on the military base.  I am ex-military and knew about dependent life on a military base.  However, the presence of family at GTMO was not something I had previously considered.  One hears about the current history and tends to forget the base has been around for a long time and that it was home to thousands of naval personnel and their families.

I recently interviewed Jon Ward, a man who lived on the base until 1960 when he graduated high school. He discussed in detail the Teenage Club of which he has very fond memories.  He revealed it was the main place for teenagers to hang out, listen to music and socialize in a small community where there were few other places teenagers could get together. Family life on the base in the 1950s and 1960s seemed to be pleasant and idyllic, according to Jon. He stressed that it was the best time of his life and he missed the closeness and camaraderie of his fellow teenagers as they shared their formative years.

I think the revelations expressed by Jon and others like him offer an insight into the experiences of the families that lived on the base.  The presence of family on GTMO and their interpretation of GTMO as home can providce insight into other places with contested histories.  These are real people who lived their day to day lives just like people living in other parts of the country.  They had fun, watched movies, went shopping, and spent their free time enjoying GTMO as a Caribbean paradise.  While Jon expressed that there were some things he missed about the states, he stated GTMO was the best possible environments to grow up.   The political arguments against and for GTMO as a detention center are circulating in the media, but the presence of families on the base offers a different perspective on how the site has been used.  For many, just like Jon, the base is home. The concept of GTMO as home is not something that is usually discussed. Maybe if people today could see the base from the perspective of the people who lived there, and not just as a detention center, then the impression of the base would change.

I think the time period my class is discussing, the 1950s and 1960s, offers a unique vision of the base which can be used to engage and educate the public beyond the contemporary issue of detainees.  The present image of GTMO does not include the entire history of the base but only it’s most recent violent and contested history.

The past of the base and the stories told by the families that spent years on there provide an insight into the definition of home. The daily lives of these military, civilians and their families give GTMO a different look beyond the present image of GTMO.  The family life on GTMO during the 1950s and 1960s looks like small town America, which most Americas can identify. However, GTMO is not as neat and tidy as it first appears.  The presence of Cuban nationals within the base and the intricacies of base life living within a contested area creates a unique tension that is not present in most average American towns. The location of GTMO and the restrictions placed on civilians, military personnel, Cubans, and family members provides complications that most people do not have to face on a day-to-day basis. These complications deal with the interpersonnel relationships that emerge when people are engaged in interactions within a small confined place.

GTMO is a relatively small outpost, therefore the people who live and work on the base are constantly involved in social interactions. These can be difficult when viewed from political affiliations, especially among American families and Cuban nationals. As teenagers, Jon revealed he and his fellow American teens engaged in personal associations with Cubans as part of their daily lives on GTMO. This is an important part of the lives of Cubans and the Americans who viewed GTMO as home.  This can provide a very unique and engaging conversation about what GTMO means to those who lived there.

University of North Carolina at Greensboro is participating in the Guantánamo Public Memory Project‘s National Dialogue and Traveling Exhibit. Opening at NYU’s Kimmel Center for University Life Windows Gallery in December 2012 and traveling to 9 sites (and counting) across the country through at least 2014, the exhibit will explore GTMO’s history from US occupation in 1898 to today’s debates and visions for its future. The exhibit is being developed through a unique collaboration among a growing number of universities as a dialogue among their students, communities, and people with first-hand experience at GTMO.

I was pleased to read this post and encounter an alternative perception of the base at Guantánamo! I think, as you say, it is an under-acknowledged and under-appreciated fact that there are other aspects to life at Guantánamo than what goes on in the detention center, to the point where it is often wise to explore the two entities on their own distinct terms. This alternate perspective that your explore, and the idea of Guantánamo as “home,” is particularly exciting to run across as it is very much in line with the overall topic and theme of the panel we are putting together at the University of West Florida. Our panel is geared toward sharing the story of the military community on the base, and some of the components of life there that you identify – families perceiving the station as a Caribbean paradise, experiencing meaningful relationships based on camaraderie, and not feeling deprived of experiences or creature comforts just because they weren’t back in the States – are all things that speak to the spirit of our panel. There are further themes we explore that build on these, such as the system of trust that existed among residents, the strong desire of many who lived there to go back, and the idea of the base community as “Mayberry.”

What really struck me as I read your post was how the atmosphere you described in the 1950s and 1960s is something that still exists today at the base in a very real way; I discovered this while listening to interviews from service members who lived at the base in the early 2000s. The aforementioned things you described as being a part of family life during the 1950s and 1960s were some of the exact same things people were saying about life on the base over the last decade, proving that this atmosphere has existed for at least half a century and speaking to just how strong and lasting that atmosphere is. It is particularly interesting to consider how these stories of the base as “Mayberry” are coming from those who lived there in the years immediately following 9/11, which most of the American public and international community consider the base’s worst years. The fact that word of the inappropriate things going on at the detention center did not seep out into the wonderful atmosphere of community on the base is something that is essential to realize when trying to construct a holistic picture of Guantánamo. Taking these steps will help to maintain a separation between the detention center and living community and to ensure that the latter does not become demonized on principle of proximity to the former. One must realize this and acknowledge that, however strong the negativity is surrounding certain aspects of the base and its detention center, there are equally potent positive aspects that exist there. Reading your post and seeing further support for the idea of Guantánamo as a great place for families is promising in the midst of our quest to expand public perception of the base!