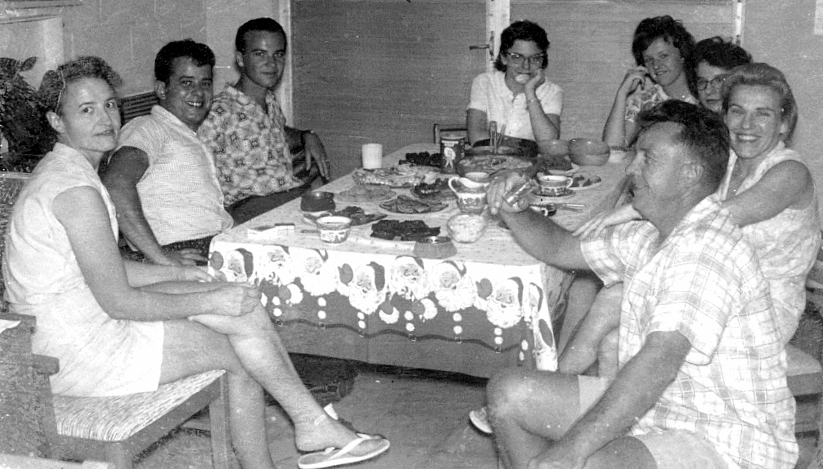 Christmas with friends at Guantánamo. Photo courtesy of Frances Matlock.

“It was easy [to raise children] because I felt that if John walked down the street at midnight, I wouldn’t have to worry about him. It was a very safe place. We never locked our doors, and there was always something for the children.”

-Dot Arguelles when asked about the safety of GTMO

I interviewed Dot Arguelles as part of the Guantanamo Public Memory Project. Dot Arguelles was stationed at GTMO from 1966-1968. The family arrived in Cuba seven years after the Cuban Revolution and four years after the Cuban Missile Crisis. As the Cuban military began to plant the cactus on the Cuban side of fence to prevent Cuban civilians from sneaking onto base, US troops began to place landmines in order to protect the base from Cuban attack. Gone were the days when military personnel and their dependents could leave base and venture into Cuba. Families were instead warned not to wander into the minefields.

I expected to hear Dot tell me of the dangers that lay across the fence in Guantanamo or that she worried for her family’s safety in the wake of the Cuban Missile Crisis. So I was surprised to hear that Dot felt completely safe while stationed at GTMO. According to Dot, daily life in GTMO involved hunting for shells on the beach, snorkeling, watching movies at the lyceum, and attending swim meets or softball games. Life was normal, except for the fact that this tiny piece of America was located within a communist country. As Dot explained it, GTMO was just like any small town in the United States. Everyone knew each other, and everyone felt safe. I struggled to think of GTMO as a military base after our interview concluded. Thinking back to my readings from class, I am also trying to fit Dot’s story into what I knew about the base at this time period. Much of what I learned from Dot sounded familiar, but some did not. Was her experience singular or was there a myriad of people who felt the same but their stories have not yet been told? I think this will be my largest concern as this project moves forward. How will I reconcile the image of GTMO in the late 60s to what the media has presented of today’s Guantanamo?

Posted by Leigh Smith- M.A. Candidate at University of North Carolina at Greensboro

GREAT story!!! THIS is the kind of story that needs to be more prevalent in this oral history of Guantanamo!! I also took part in this project however my entire interview was condensed into a small little blurb about my husband’s and my first Christmas as a married couple on the island… There was SOOO much more to my story! My husband and I met there, our oldest daughter was born there, we left in 1990, and returned as civilians in 1992 and were summarily evacuated in 1994 due to the Cuban and Haitian refugees on base… I’m very glad that your story was portrayed in such a good light… I wish that the tags on the left reflected some more positive words (especially the larger print ones!)