Combatting a Culture of Fear 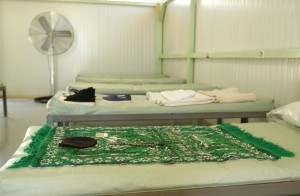 After fully immersing myself in the history of the naval base at Guantánamo Bay, Cuba, I am surprised at how much history I was unaware of at the site. With Guantánamo constantly on my mind, I find myself striking up conversations with anyone and everyone regarding their opinions on the current status of the base. I quickly found that most people actually do have an opinion on post-9/11 Guantánamo, but many of those opinions are framed by misinformation or ignorance about communities of color, particularly Muslim Americans.

Growing up as an Indian American woman in the United States, I was never forced to confront my ethnicity as much as I have in the last decade. After 9/11, our nation was blanketed by a duality of emotions, and patriotism quickly turned into fear of the “other.” This fear caused some to develop Islamophobia and react violently against Muslim American communities and other people of color who are perceived to be Muslim. I was revolted when reading about U.S. military men using the Islamic faith against Guantánamo detainees as a torture tactic. If government officials are authorizing anti-Muslim tactics against detainees, why would many Americans treat Muslims in the U.S. differently?

Muslim American communities are not the only ones subjected to hate crimes in the U.S. The recent shooting at the Sikh temple in Oak Creek, Wisconsin, reminds us how prevalent racism is in our country. Deepa Iyer, the executive director of South Asian Americans Leading Together (SAALT), writes that the Oak Creek tragedy should not be treated as a one-time incident, but reflects the nation’s attitude towards racism and Islamophobia. She states that this recent event is an “assault on our American ideals, whether those targeted are Muslims, or Sikhs, or Jews, or Christians.”

This climate of fear and racism are reflected in the government’s counterterrorism policies and surveillance tactics that target people of color. These policies impact the lives of all Americans and extend beyond the issue of national security to the violation of civil rights. Not only is the government practicing racial profiling, but by exemplifying racist tendencies towards communities of color, it sends a message to the general population that such bigotry is acceptable. As a result, there continues to be obscene amounts of hate crimes and violent actions towards people of color here in the United States, undermining the importance of civil liberties and human rights for all citizens.

As an American-born woman of color, I am perplexed by the situation surrounding Guantánamo and how it resonates with the rest of the country. The more I learn about the site, the more empowered I feel to create a national dialogue that increases knowledge about the current status of the base and how it affects each and every one of us. I wonder what the future of the site holds, and cannot help but think of all the positive ways in which Guantánamo could actually be used, such as a safe refuge for those working towards a better life in the U.S., just as my family did when they immigrated here years ago. The injustice at Guantánamo challenges what our nation stands for, violating our civil rights as Americans and human rights across the globe.

Your post raises an issue that is deeply embedded within the nation and remains to be a personal concern of my own. The days following the aftermath of September 11 tested my own identity and how I felt about the United States and government. There was an insurgence of fear of people of color, particularly geared toward those of Middle Eastern and South Asian descent. As an American-born South Asian woman as well, I find that the use of torture tactic involving the Islamic faith to be a crime that should be thoroughly recognized. I do not think that there should be any form of exception regarding the detainees at GTMO. The laws of the United States Constitution and the rules of the Geneva Convention should be applied. Therefore, the use of the Islamic faith as a means of torture should be reprimanded and deemed unconstitutional. GTMO and the aftermath of 9/11 affected my own life, in terms of coexisting within a country with racism and fear, which undermines that symbol of liberty that America represents. I hope with the Guantánamo Public Memory Project, we can educate and engage in peaceful discussions about GTMO’s and our future.