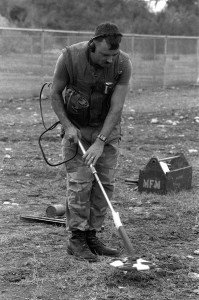 A marine uses a metallic mine detector to locate mines under the ground during training at Guantánamo. Courtesy Records of the Office of the Secretary of Defense.

January 25, 2013: A U.S. appeals court overturned the war crimes conviction of Ali Hamza al Bahlul, a Yemeni national serving a life sentence at the detention facility at Guantánamo. Bahlul worked as a publicist for al Qaeda, posting training and recruiting videos on the internet for the organization. The dismissal of the charge is likely to affect next week’s pre-trial proceedings at Guantánamo for several planners of the September 11th attacks.

January 26, 1960: The U.S. naval base in Cuba became the subject of increasing tensions between Washington and Havana when Cuban Justice Minister Alfredo Yabur Maluff warned U.S. officials that Cuba is prepared to fight a U.S. invasion. The statement was a response to a report delivered by a Cuban radio commentator that over 10,000 marines were landing at Guantánamo.