May 23, 2012: In a major speech on counterterrorism policy, Barack Obama echoed his call to close the detention center at Guantánamo. While he announced an end to the order banning the transfer of detainees to Yemen, he also acknowledged that a solution does not yet exist for the detainees that “have participated in dangerous plots or attacks, but who cannot be prosecuted—for example because the evidence against them has been compromised or is inadmissible in a court of law.” 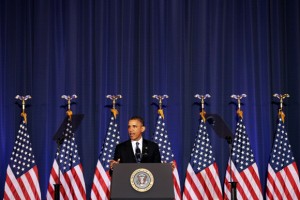 WASHINGTON, DC – MAY 23: U.S. President Barack Obama speaks at the National Defense University May 23, 2013 in Washington, DC. Obama used the speech to outline and justify his administration’s counterterrorism policy, including increased cooperation with Congress on matters of national security, added transparency regarding the use of drones, and a review of current threats facing the United States. (Photo by Win McNamee/Getty Images)

May 24, 1992: Makeshift camps established at Guantánamo for Haitians fleeing political violence reached full capacity at 12,500. In response, President H.W. Bush ordered Haitian refugees to be intercepted on the high seas and forcefully returned to Haiti without due process or legal councel.