Surveillance, Detention and Invisibility: GTMO and the Twin Cities 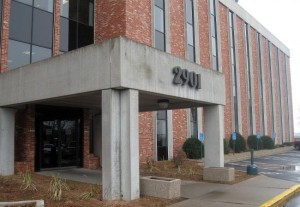 This unmarked ICE building in Bloomington, MN houses the detention immigration court, run by the Department of Justice, in its basement. (MPR Photo/Sasha Aslanian)

In doing research for our project it became apparent that U.S. Immigration and Customs Enforcement (ICE) could be characterized as an invisible, mobile, disciplinary force that evades the public eye. One example of this is that in many areas, such as the counties surrounding Minneapolis and St. Paul, ICE does not have its own detention facilities, but instead rents beds in county jails (often negotiated with the county through a quota system, giving a monetary incentive to fill beds). Under the custody of ICE, immigrant detainees are subject to random transfers to other facilities with no public notification of the movement–making it very difficult for family, friends and lawyers to find and help detained persons. This is reminiscent of the stories of the detained “enemy combatants” who, before arriving at GTMO, were randomly transferred to different detainment facilities in a number of different countries. The confusion that arises in this kind of invisible, moving detention makes the elision of both the law and of an individual’s basic rights not just possible, but even easy—and it all occurs in a way that is virtually unbeknownst to the public.

While we commonly think about how the presence of certain objects (such as landmarks) shapes our experience of a place, it is just as important to consider how the absence of objects can also contribute to the shaping of that place. Moreover, it is possible that certain objects that are invisible to some may be quite visible for others. It is through this lens that I want to think about the ICE centers that are located inside of county jails, as well as the location of GTMO. Both are virtually invisible for most people, as the majority of Minnesota residents are not typically aware of the ICE facilities, and U.S. residents do not typically think of Guantánamo when they think of the geography of the U.S. Furthermore, the average resident has no access to what goes on inside of these spaces of detention. On the other hand, those who have experienced detention (or know someone who has) are likely to conceive of the geographical space of Minneapolis/St. Paul in a radically different way. Similarly, a detainee would have an entirely different understanding of the U.S. and its geography after experiencing GTMO. The invisibility of these spaces of detention (to a large part of the community, but not to all) contributes to the hegemonic regime of surveillance, where those who have not been detained, consent to the existence of these spaces in a way that could be characterized as “out of sight, out of mind.” With these ideas in mind our group chose to include a map in our project that depicts these kinds of invisible spaces. Moreover, one of the many reasons I see the Guantánamo Public Memory Project as being crucial is that it is itself a space that is working to make the invisible more visible to its audiences.

One Comment to: Surveillance, Detention and Invisibility: GTMO and the Twin Cities