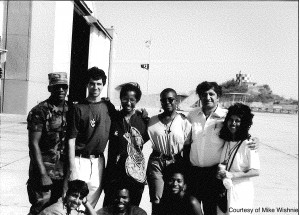 How can we trust memory? As historians, we strive to be objective as possible. We gather evidence, often basing our arguments on documents that we find in archives. Yet, we have to be able to trust our sources. Oral histories and people’s memories are hardly perfect. Who can remember what exactly happened five or ten years ago?

The Guantánamo Public Memory Project asked people to reach into their memories and dictate their version of the events that transpired during their time at and relationship to Guantánamo by using questions such as “What do you remember?” and “How did you feel?” Though we know it’s an impossible task—as Michael Wishnie, who as a Yale Law student worked to free Haitians at Guantánamo, admitted, he is unable to remember conversations from that time word for word—we still ask people to remember as much as possible for the sake of history.

These recorded memories only recognize a select few out of a vast number of people who were involved in or detained at Guantánamo. And there are silences. For instance, our class was unable to speak directly with Haitian children who were eventually placed into homes in/around Boston. We only heard a small part of their stories because it was relayed through a medium. Many people who we hoped would speak publicly about their stories may never do so. Even those who granted us access to their memories remained silenced on certain topics, dancing around especially painful subjects. How do these lacunae affect the stories that are told?

As Karen L. Ishizuka, a curator at the Japanese American National Museum, has poignantly observed, silence has an important function in history. To Ishizuka, “understanding that doesn’t mean having to be loud. Rather we must first be quiet, in order for memory to triumph over forgetting.” Maybe it is all right that we cannot access all the stories that we really want to be told. As memory is fickle, not everything that we want to know can be remembered, especially if the experience was so damaging that they have hidden those memories from even themselves. Rather, we should rely on the memories that people can remember since these are more trustworthy than those that are incomplete and not even understood by the interviewee.

According to Pierre Nora, “there are lieux de memoire, sites of memory, because there are no longer milieux de memoire, real environments of memory.” Memory comes into being when places no longer exist or have changed over time, and this online archive and project are an important step in creating a lieux de memoire for Guantánamo. Guantánamo, since it is yet so geographically close to the United States, is also at the same time far away in our memories. Right now, Guantánamo is known for the torture of detainees, many that are in captivity due to Bush’s War On Terror. On the other hand, this leads to an erasure of memory and history of other periods in Guantánamo’s history. Therefore, this creation of a lieux de memoire of Guantánamo is extremely important in not allowing the erasure of memory.