June 1, 2014: The last U.S. soldier held captive in Afghanistan is released by the Taliban, in exchange for five Guantánamo detainees. These detainees, all of which are understood to have connections to the Taliban, had not previously been cleared for release, and faced indefinite detention at GTMO. 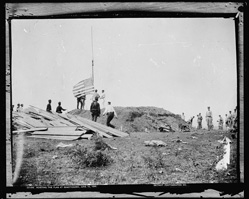 June 14, 1898: Although the U.S. had officially intervened in the war between Spain and Cuba in April it wasn’t until June that U.S. forces landed at Guantánamo Bay and engaged Spanish troops in battle. On June 14, Cuban and U.S. attacked the water supply of Spanish troops stationed close to Guantánamo. The fighting lasted for days, until the Spanish forces retreated. Five weeks later, Spanish surrendered completely.