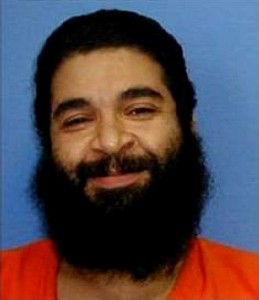 This week marks the beginning of detainee Shaker Aamer’s second decade at Guantánamo Bay. In 2002 Aamer was arrested in Jalalabad, Afghanistan. He is a Saudia Arabian British resident, and was allegedly in Afghanistan working for a Saudi charity.

No charges have been filed against him. Activists and international NGOs continue to call for his release.
In other news:

In 1903, after joining Cuban fighters to oust the Spanish, the U.S. required the new Cuban government to lease it Guantánamo Bay for coaling and naval stations as a condition of support for Cuban independence. Almost 15 years later, the U.S. continued to have a strong political and military presence in Cuba.

On this week in 1917, rebel Cuban forces revolted following allegations that Cuba’s president Mario Garcia Menocal – who backed U.S. presence in Cuba – rigged his election. Guantánamo Bay’s U.S. Naval commander engaged in negotiations between the Cuban military and rebel forces over the harbor without U.S. government approval. Due to lack of official approval, the U.S. government did not honor the negotiation terms, which fueled hostility towards the U.S.
According to a February 17, 1917 issue of the New York Times Cuban forces in Guantánamo joined the revolt, but the Cuban military still pledged allegiance to the U.S. Navy. General Gerardo Machado y Morales, an important military leader during the second wars of independence, was erroneously declared dead this day. This uprising was the catalyst to a prolonged era of U.S. presence in Cuba.