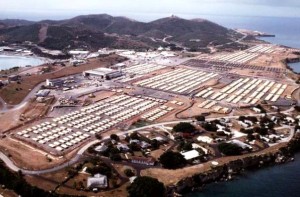 On January 11, 2002, the first prisoners from the Bush Administration’s “War on Terror” were landed at the Guantánamo Bay Naval Base, a forty-five-square-mile enclave at the eastern end of Cuba that America secured in a 1903 treaty and has held ever since.

Today marks the tenth anniversary of U.S. detention operations there. In the intervening years, the prison population swelled, with a total of 779 prisoners having been held there at some point. Some 600 were released (mostly by the Bush Administration), and of the 171 still held there, a majority have actually been cleared for release. These eighty-nine men are something of a political ping-pong ball between Republicans, who continue to do everything in their power to keep Gitmo open and to block the prisoners’ release, and the Obama White House, which seems intent on keeping questions surrounding Gitmo out of the headlines.

Obama pledged during his campaign to close Gitmo within his first year as president, but this pledge has gone unfulfilled—in part because he was slow to act, but largely as a result of congressional obstruction.

Read the rest of this article on Harper’s website.