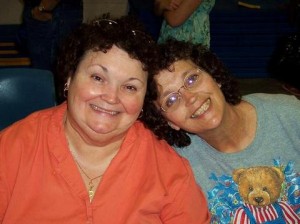 The story that resonates with me the most is that of Anita and Sue Lewis. Initially, I had no knowledge of Guantánamo Bay naval base as anything other than a prison for detainees of the wars in Afghanistan and Iraq. Although I found the stories of the refugees enlightening, the Lewis sisters’ storystands out the most to me because I find it most relatable. Although I have never lived on a base, my father is a police officer and most of the men in my family have served in the military. I can relate to the sense of community that families form in order to support one another while husbands/fathers are working hard and risking their lives.
In this way, I also related to Janet Miller’s Memories of Guantánamo Bay, 1960-1962 in that groups of families come together to form a larger unit. These stories indicate that families on the base were doing their best to live normal lives in an abnormal situation: movie nights on the ship, weekends at the beach, (attempts at) eating foods from home. Although the refugees also made a new culture for themselves, they lacked the luxuries of safety and status that military personnel and their families had. Therefore I feel a stronger connection to the site through the military families who encounter other groups, as it is near impossible to put myself in the place of prisoner.
My connection to the families’ stories led me to an idea I had not considered during class discussions: in addition to asking for the opinions of military personnel, we should also be asking their families. Given the opportunity, I would ask them: What are your memories of the base(s) you have lived on? Do you consider them home? How has it shaped your identity of where you’re from? If your base were later appropriated as GTMO was, how would you feel?
My roommate spent the first few years of her life on an Army base in Hawaii, and she speaks of her life on the island in a way that reminds me of the Lewis sisters and Janet Miller. Although these bases exist as a means of protection against a larger national threat, she said she never once felt unsafe, and her childhood was full of unlocked doors and running around with the other children. The children do not need to know that their parents are there to prevent other countries from bombing the United States; they just know it as home. Anita Lewis Isom’s story is unique in that she lived on the base three separate times for different reasons, but her narrative leaves me to wonder what others who lived on bases think about issues such as national security, safety, and specifically Guantánamo. They could offer a new perspective on why and how such a place – much like their homes – should be part of public memory.