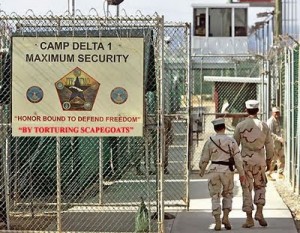 This week, the Pentagon set Khalid Sheik Mohammed’s long awaited trial in motion. He and four other Guantánamo Bay detainees, accused of orchestrating the September 11, 2001 attacks, will be tried at a military tribunal instead of a civilian court. They face the death penalty if convicted.
These five men are charged with organizing the September 11th attacks. Specific charges include funding and training the men who hijacked the four commercial airliners that hit the World Trade Center, Pentagon, and a field in Pennsylvania.
2,976 people were killed in the September 11th attacks.
The detainees were initially tried in a 2008 military commission, but President Obama suspended the trial when he came into office. Attorney General Eric H. Holder Jr. led efforts to have the trials held at a U.S. federal court in New York, but Congressional opposition blocked this vote. The trial is expected to be held at the Guantánamo Bay naval base. The proceedings will be broadcast at remote viewing sites in New York, Massachusetts, New Jersey and Maryland.
Khalid Sheik Mohammed is also charged with American journalist Daniel Pearl’s murder, a 2002 nightclub bombing in Indonesia, a failed airline bombing attempt in 2001, and the 1993 World Trade Center bombing.
The other detainees include Walid bin Attash, Mustafa al Hawsawi, Ramzi Bin al Shibh, and Ali Abdul Aziz Ali—who is Khalid Sheik Mohammed’s nephew.
Advocates, including ACLU president Anthony Romero, oppose this move, saying that justice cannot be served when the process for detaining and interrogating these suspects has been under question. According to declassified CIA documents, Khalid Sheik Mohammed was waterboarded 183 times, and military commission prosecutors cannot use evidence gathered as a result of torture.
The five suspects must be arraigned within 30 days, and are expected to enter a plea. 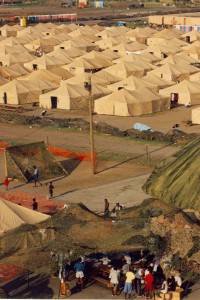 This week in 1993, 16 HIV-positive Haitian refugees were transported from refugee camps at the Guantánamo Bay naval base to Miami. They were transported after a judge ordered that HIV-positive Haitians at Guantánamo Bay must be provided proper medical care by the U.S. or transported elsewhere for care.
Four family members were also among the refugees transported, and all would be settled in New York or Miami. A total of 36 HIV-positive Haitians were granted entry to the U.S.
The headline for an article by the Associated Press (AP) from April 6, 1993, “AIDS-Infected Haitians Flown to America from Navy Detention Center,” (byline: Tracy Fields, dateline: Miami), reveals both the underlying sentiments around this transport, and the ignorance around HIV/AIDS that persisted at the time.
The AP article claims the Haitians were previously cleared for asylum – some more than a year prior – but were held at Guantánamo Bay because they were HIV-positive. On March 12, the U.S. House of Representatives voted in support of a Senate bill that banned HIV-positive immigrants from entering the country. And while this policy was not signed into law, the Clinton administration did not halt the ban.
The Haitian refugee crisis began in September 1991 when Haitian President Aristide was overthrown in a military coup supported by the U.S. In the following months violence escalated, leading to more than 200,000 Haitians fleeing the country. Many sought refuge in the Dominican Republic, while others left the island, often in poorly-constructed, overcrowded boats. Because admitting and processing thousands of Haitian refugees to the U.S. was risky, and Haiti was too unstable for repatriation, President Bush ordered the U.S. Coast Guard to pick the refugees up at sea and deliver them to Guantánamo Bay—a place where U.S. immigration and asylum policy did not apply. Refugees were placed in a holding area called Camp Bulkeley, and later Camp McCalla and other camps.
This week in 1993, 224 Haitians remained at Guantánamo Bay, even though most Haitians had been repatriated to Haiti. They were being held because they were HIV-positive, or were close relatives of HIV-positive refugees.