Occupation Justification: Freedom, Control, and the Paradox of Guantánamo

“If we know Saddam Hussein has dangerous weapons today – and we do – does it make any sense for the world to wait to confront him as he grows even stronger and develops even more dangerous weapons?”

“America is a friend to the people of Iraq. Our demands are directed only at the regime that enslaves them and threatens us. When these demands are met, the first and greatest benefit will come to Iraqi men, women and children.” – George W. Bush, Cincinnati Address on Iraq, 2002 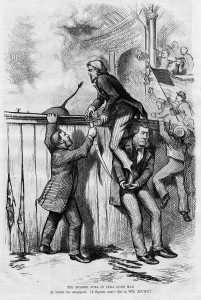 Thomas Nast, The Spanish Bull in Cuba Gone Mad. It must be stopped. If Spain can’t do it, WE MUST!, 29 November 1873. Woodcut, Harper’s Weekly

The political cartoonist Thomas Nast is famously credited for creating many American icons, such as the Democratic donkey, the Republican elephant, and Uncle Sam—the embodiment of the American nation.  In this Harper’s Weekly image, Nast depicts Uncle Sam being hoisted over the fence by then-Vice President Henry Wilson while President Ulysses S. Grant hands him a sword with U.S.A. inscribed on the blade.
The viewer’s sight-line is mitigated by the large fence, but Nast shows the hindquarters of a bucking bull, alluding to Spain. The area behind the fence represents Cuba, and surrounding this fence, American soldiers and politicians clamor to intervene against the bull. This image reflects the popular American belief that Grant should intervene in Spain’s unjust and unwanted Cuban occupation. Although there were many different motives informing American desire to free Cuba from Spanish rule, it was often trumpeted in paternalistic terms: Cubans needed to be protected and liberated.  However, Grant consistently refused to intercede in Cuba and ran for his 1872 reelection under the mantra “Let Us Have Peace.”
Nast’s cartoon indicates that many Americans, including the artist himself, saw it as their duty to intervene in Cuba. Interestingly, Nast’s cartoon shows that he was not concerned with Spanish control of Cuba, but rather with the increasingly violent and unsuccessful means Spain used to quash Cuban rebellions.  He states that if Spain cannot stop the mad “Spanish Bull in Cuba,” then the U.S. should intervene.  His cartoon indicates that calls for Cuban freedom may actually have been calls for Cuban stability, perhaps to encourage American capital investment.  Although President Grant was successful in keeping peace with Spain, the War of 1898 left Cuba open for American occupation in the twentieth century.
George W. Bush and American media sources presented the U.S. occupation of Iraq in ways that resonate with the nineteenth-century Cuban independence movement.  When weapons of mass destruction were not discovered in Iraq, the war was touted as a means to free the Iraqi people from Saddam Hussein’s dictatorship.  The war was rechristened Operation Iraqi Freedom, with the stated goal of establishing democracy and ending human rights abuses.  However, as the War on Terror continued, those suspected of ties with terrorist organizations were imprisoned at Guantánamo Bay naval base.  By labeling these prisoners enemy combatants the government considers them ineligible for prisoner of war rights as stipulated by the Geneva Convention.  This situation creates a paradox in U.S. policy: freeing the Iraqi people from human rights’ abuses while disallowing rights for the detainees. Nast’s political cartoon and recent history show that too often U.S. actions are touted as promoting freedom, even when they deny people’s rights.
Posted by Natalie Fleming – MA Candidate at Rutgers University
Rutgers University is participating in the Guantánamo Public Memory Project‘s National Dialogue and Traveling Exhibit. Opening at NYU’s Kimmel Center for University Life Windows Gallery in December 2012 and traveling to 9 sites (and counting) across the country through at least 2014, the exhibit will explore GTMO’s history from US occupation in 1898 to today’s debates and visions for its future. The exhibit is being developed through a unique collaboration among a growing number of universities as a dialogue among their students, communities, and people with first-hand experience at GTMO.