Two Guantánamo detainees from China, who were held for more than 10 years without charges, have been resettled in El Salvador.

Both were captured in Pakistan along with 20 other Uighurs—a Muslim group who live primarily in China’s Xinjiang Uyghur Autonomous Region, and have had recent troubles with the Chinese government. These men were in Pakistan because a September 2001 air strike by U.S. forces destroyed their camp. They were cleared of charges in 2008, but remained in limbo at Guantánamo Bay because legal restrictions blocked their transfer.
The Salvadorean government says they agreed to take the detainees because many countries accepted their refugees during the 1980-92 civil war.
To date, 169 detainees remain at Guantánamo Bay.

In other news this week:

This week in 1961, the U.S. launched the Bay of Pigs invasion. The invading troops were primarily Cuban exiles that the U.S. trained in covert camps in Guatemala. The mission seemed doomed from the start. The initial phase – an air raid launched by the U.S. air force in planes painted to look like Cuban planes – was unsuccessful, and also tipped Cuban forces off to the impending attack. 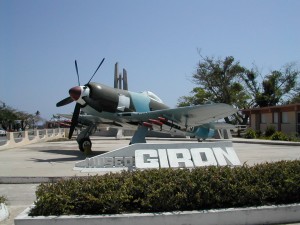 Arriving at Playa Giron on April 17, 1961, invading U.S. forces were quickly overwhelmed by Cuban troops. Earlier attempts by the U.S. government to infiltrate Cuba and garner support in the months leading up to the attack failed, and the mission was suspended on April 19. More than 100 soldiers in the Cuban exile force were killed, and at least 1,200 were taken captive. The Bay of Pigs invasion was an embarrassing fiasco for the U.S., and an important victory for the Cuban revolutionary forces.
According to historian Jonathan Hansen, the Guantánamo Bay naval base played a role in this attack. U.S. military commanders were careful not to train invading forces at Guantánamo Bay, since Cuban forces closely monitored the area surrounding the base. But Admiral Robert Dennison, then commander at Guantánamo Bay, prepared the base to support the attack by readying troops, planes and ships.
Hansen also argues that Guantánamo Bay was intended for another covert action, whereby U.S. trained soldiers – disguised as Cubans – would launch a fake attack at Guantánamo Bay in order to instigate an attack on Cuban forces. It is unclear why this attack did not take place. Documents related to the Bay of Pigs attack are now available on the C.I.A. website.

If you admit there are innocent polepe there, yet you still condone it, I question your morals. You’re also forgetting that correlation doesn’t imply causality. It’s quite possible that polepe commiting terrorist acts after Gitmo are committing them because of what was done to them at Gitmo, not because of what they were doing before Gitmo as revenge.If you’re the historical type: Blackstone’s formulation Better that ten guilty persons escape than that one innocent suffer If you’re the bilblical type: See Genesis 18:23-32If you’re the legal type: The presumption of innocence, sometimes referred by the Latin Ei incumbit probatio qui dicit, non qui negat (the principle that one is considered innocent until proven guilty) is a legal right of the accused in a criminal trial, recognised in many nations. The burden of proof is thus on the prosecution, which has to collect and present enough compelling evidence to convince the trier of fact, who is restrained and ordered by law to consider only actual evidence and testimony that is legally admissible, and in most cases lawfully obtained, that the accused is guilty beyond a reasonable doubt. In case of remaining doubts, the accused is to be acquitted. This presumption is seen to stem from the Latin legal principle that ei incumbit probatio qui dicit, non qui negat (the burden of proof rests on who asserts, not on who denies). (straight from Wikipedia and full of sources)

This is the story behind the coctrenina wire. I lived in GTMO from 1992 until 2008.In ’95 the Navy housed 20K cuban migrants on the GTMO golf course, 30K Cuban migrants at Rasio Range(curent location of the prisons) and 25K Hatian migrants on the windward airfield. The cubans on the golf course were upset because they heard the Hatians were being treated better so they held a protest and broke out of the golf course compound. I watched as all this happened from my pick up truck. The cubans marched across Cooper Field and up to Chapel Hill were they stayed until they were returned to the golf course. During the time that the cubans were on chapel hill (next to McDonalds) the military surrounded McD’s with the consertina wire. It was removed the same day.