A Fight For Due Process 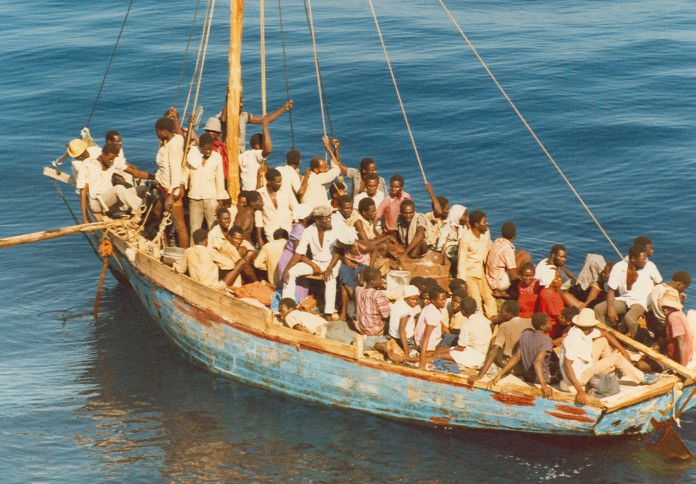 The image above is of a group of Haitian refugees who are making their way toward Cuba. This image reveals the terrible conditions of the boats and journey the Haitian people endured during their travels. The over-crowding of people shows how many individuals searched and dreamed of freedom to the west.

By Antoinette Strickland
In 1977 the St. Joseph arrived off the tip of Guantánamo Bay with 101 Haitian refugees. Out of the 101 people only 4 were permitted entry into the United States. A few years later 2,000 Haitians arrived on the U.S. coast looking for refuge, but only 10 percent were permitted entry, leaving 800 to be repatriated.
The Immigration and Naturalization Service (INS) considered these refugees economic rather than political refugees, which made them ineligible for political asylum. During this time the U.S. had become allies with Haiti during the Cold War. Haitian dictator François Duvalier was considered an anti-communist leader (although this was not true), and was known for political persecution.
On November 10, 1990, 500 Haitians were detained at Guantánamo Bay for fear of the spread of HIV/AIDS. Continuously, Haitian refugees have sought asylum and been denied because the U.S. government does not believe that Haitians face political persecution. However, Cuban refugees have been allowed free access to the U.S. because the government considers them in danger of political persecution.
The United Nations created the Alien Migrant Interdiction Operation (AMIO), which prohibited the return of foreign refugees to their homeland in which they might be subject to political or cultural persecution. The U.S. turned a blind eye to the situation in Haiti even though there was plenty of evidence of political persecution taking place. The U.S. claims that they have no sovereignty over Guantánamo Bay, even though they control who comes and goes from Guantánamo Bay and refugees’ rights to due process. However, refugees who are brought to Florida are given the right to due process. This connects to the U.S. government’s claim that do not have sovereignty in Cuba, which allows them to deny detainees the constitutional rights they would have on U.S. soil.
To this day it is debatable what will happen to the remaining detainees at Guantánamo Bay, especially since many countries are reluctant to take responsibility for these individuals. A chance to a fair trial would mean that the nations recognized the detainees or refugees as actual citizens with rights, which is what each country is trying to avoid.

Posted by Antoinette Strickland – MA Candidate at Rutgers University
Rutgers University is participating in the Guantánamo Public Memory Project‘s National Dialogue and Traveling Exhibit. Opening at NYU’s Kimmel Center for University Life Windows Gallery in December 2012 and traveling to 9 sites (and counting) across the country through at least 2014, the exhibit will explore GTMO’s history from US occupation in 1898 to today’s debates and visions for its future. The exhibit is being developed through a unique collaboration among a growing number of universities as a dialogue among their students, communities, and people with first-hand experience at GTMO.

2 Comments to: A Fight For Due Process

The distinction between an economic and political refugee is hard one to make. Although these Haitians were determined to be economic refugees, I believe this is an issue of cause and effect. Without political strife, would there be economic refugees? In my opinion, the United States needs to consider this factor when deciding to whom it will give asylum.
One can argue that the situation in Haiti during the Duvalier reign was much worse than that of mid-20th century Cuba. However, with the large amount of refugees infected with HIV/AIDS, it puts it into a broader context of why Americans at the time were less willing to accept Haitian refugees: A general prejudice against these people.
As shown in the past, GTMO is the perfect place to hold people of questionable residency. The United States set up GTMO to operate outside the jurisdiction of American laws. And, for precisely that reason, it is able to pick and choose who it allows access to our constitutional rights.