Children at Guantánamo Bay Naval Base 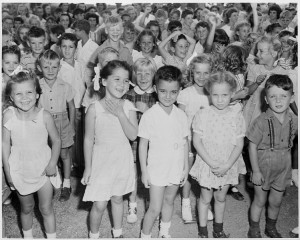 Despite the Guantánamo Bay base’s military purpose, it has also been home to a number of children over the years. In 1931 the W.T. Sampson School was founded to accommodate the children of military personnel and continues to operate today. The school was closed and students evacuated to the mainland during three periods of intense mobilization at GTMO: World War II, the Cuban Missile Crisis, and the refugee crisis of 1994-1996. Other notable dates for the school were 1941, when the school divided itself into an elementary and high school, and 1976, when it joined with other base schools into the Department of Defense Dependents School system (DoDDS). Today the elementary and high schools have a population of about 100 students each (http://www.am.dodea.edu/cubaweb/Schoolinfo/About.html).

The small and remote nature of the school and community has produced extremely intimate surroundings, giving rise to the description of the residential areas of the base as “like going back to the 1950s” (http://www.stripes.com/news/at-guantanamo-a-dodds-school-unlike-any-other-1.80788) and “a modern Mayberry,” after the idealized rural setting of the 1960s’ sitcom The Andy Griffith Show (Jonathan Hansen, Guantánamo: An American History, 235). While such neighborly surroundings can be considered idyllic, they can also be regarded as suffocating. There are extremely limited possibilities for students to leave the base to socialize with students from the mainland United States or Puerto Rico. Cuba, of course, is off limits. In fact, even an academic knowledge of Cuba is limited: there are no courses on the history of Cuba in the DoDDS curriculum (http://www.dodea.edu/curriculum/socialStudies.cfm?cId=courses), although a Puerto Rican history class is offered. There is a Host Nation Studies program for the elementary school students (http://www.dodea.edu/curriculum/hostNation.cfm), which is intended to introduce small children to their host country’s language and culture, though it does not appear that the students are actually taken on excursions into Cuba like children in several other host countries are. 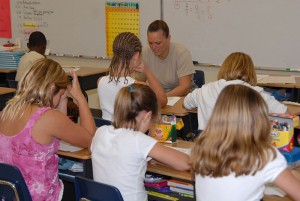 The problem of isolation is not lost on administrative and childcare professionals. A former principal of W.T. Sampson expressed concern over the social preparedness of her students (http://www.stripes.com/news/at-guantanamo-a-dodds-school-unlike-any-other-1.80788). While there is much anecdotal evidence that the seclusion of the base produced alcoholism in the adults who arrived there from the mainland (Hansen, chapters 4-7), there have been no official statements made as to isolation’s effect on individuals growing up at Guantánamo. However, there is as much positive anecdotal evidence as negative.  JoAnn Hawkins, who attended elementary and high school on the base through the 1950s and early 1960s, wrote in an email to this author, “when the gates were open [we] had many Cuban friends so [we] never felt isolated,” and even when the base became closed off, multiple school activities kept her and her friends in a social atmosphere. To her, living at Guantánamo was not very different from living in any small town in the United States.

7 Comments to: Children at Guantánamo Bay Naval Base

After reading your post I thought about how those children celebrated events and which buildings around the base may have been used to facilitate those events. Were you and your team able to find any details in that area? Thanks

Very interesting post, many people do not realize that Guantanamo Bay played many roles and served people in many ways throughout it’s history. A lot of people see it as a Naval Base or prison for terrorists in light of recent portrayal of the base and even though these aspects are true we can’t take away the fact that it also housed families and children who went to school in a naval base in another country and how learning in this kind of environment and interacting with children in and outside the base shaped their lives which is not something you hear about often when talking about Guantanamo Bay.

Your focus on children living at the Guantánamo Bay Naval Base is interesting and insightful. The quality of education and exposure to diversity was no doubt limited given the geographic location of the base. While it is important to acknowledge the varying conditions of people who live in Guantánamo, there were also children at Guantánamo who were not associated with American military families. Given the recent news of Omar Khadr release to Canadian officials, the implications of children on the base as detainees is an intriguing topic. (http://www.cbc.ca/news/politics/story/2012/10/05/khadr-day-parole.html) When Khadr was brought to Guantánamo he was only fifteen years old. His family had been involved in terrorist activities, and no doubt that is how he became involved at such a young age. He pleaded guilty to murder, attempted murder, conspiracy, and providing material support for terrorism.

Even within the American judicial system fifteen year olds can be tried as adults; however, American juvenile detention centers and American prisons are far different places than Guantánamo. Groups who strongly oppose the use of enhanced interrogation techniques (or torture) have declared that military personnel used these psychologically damaging methods on Khadr. (http://original.antiwar.com/fawzia-sheikh/2012/10/05/coming-of-age-in-a-guantanamo-jumpsuit-2/) The lasting implications of Khadr’s “coming of age” and “education” in Guantánamo will be interesting to observe as he is slowly reintegrated into a free society. The next years of Khadr’s life could have serious implications on the world’s opinions of Guantánamo.

Ms. Sheridan,
I am glad you made this contribution to the blog. Although I disagree with what you’ve written, I view your post as an opportunity for dialogue on what life is like for military families and children on small overseas bases.
I would like to begin by commenting on your selection of photographs. The first photograph dates from the year the military was integrated, 1948. Because the military was segregated until 1948, it stands to reason that any official military photograph from that year or earlier depicted a sea of white faces. Your second photograph, however, in no way represents the diverse and integrated environment which exists today at all U.S. military installations, including GTMO.
I agree with your assertion that GTMO does not reflect the demographics of society as a whole, but I agree for reasons other than what you intended. The base is more ethnically diverse and religiously diverse than any community you will find in civilian America—certainly more diverse than any neighborhood in, for instance, New Brunswick. The U.S. military brings together Americans (and men and women who are not yet Americans) from almost every ethnic, cultural and religious group. With last year’s repeal of the “Don’t Ask, Don’t Tell,” the inclusiveness of military communities is more apparent than ever.
Even a casual glance through JTF-GTMO’s weekly magazine, The Wire, would put to rest any idea that GTMO children (and their parents) are living in an isolated, homogenous community and are unprepared to deal with the outside world. The magazines are filled with pictures of Latinos, African Americans, and Southeast Asians. There is one picture after another of black children playing at GTMO, African American service women taking their oaths as non-commissioned officers at GTMO, and black women singing at GTMO’s Irish pub. The Black Heritage Organization of Guantanamo Bay held a gala ball this spring in celebration of black history. In February 2008, the base celebrated Mardi Gras with a parade, in which an army National Guard unit on duty from Louisiana participated.
The base chapel holds Islamic services, Jewish services, LDS services, and Catholic services in Spanish. It stands to reason that there are enough Muslim, Jewish and Mormon service members at GTMO to warrant holding such services. (At my last duty station on a remote tropical island, my supervisor was an observant Muslim and more of my coworkers than I can count were LDS. Unless you can produce evidence to the contrary, there is no reason to believe service members at GTMO do not enjoy a similarly diverse religious environment).
The base recently celebrated Cuban American Friendship Day—as they have since 1969—and students from W.T. Sampson performed Cuban dances, listened to Cuban music, ate Cuban food, and spent the afternoon with the base’s Cuban workers. Just because the school does not offer a course in Cuban history (and even if the school did offer a course in Cuban history, anti-military critics would probably claim the course was just “white imperialist propaganda”) does not mean the government is suppressing information about Cuba, as your post seems to imply.
In summary, I do not believe GTMO has a homogenous environment reflective of imperialist policies, as you claim. Although the GTMO community is small, children are taught on a daily basis to interact with people from diverse cultural and religious backgrounds. GTMO’s inclusive environment definitely prepares children to deal with the outside world.

Jeremy Hatcher – MA Candidate at the University of West Florida