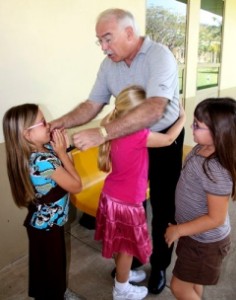 This picture is of former Assistant Principal Jay Gilbo of W.T. Sampson High School and Elementary School with a group of third graders going back to class after lunch.  The current popular opinion and perspective surrounding Guantánamo Bay is of Camp X-Ray and the “enemy combatants” detained at the base. However, there is another side to life on the naval base, as seen in the photo.  During various times in its history, American military personnel have been allowed to bring their families to live on the base. Historically, their lifestyle both supported and suffered from the ideology surrounding American expansion.

When the Guantánamo Bay naval base was established in 1903, only male sailors were allowed to reside there partly due to the base’s underdeveloped facilities. But by the mid 1920s naval wives and children were allowed to live there. The base, originally seen as tangible evidence of supposedly hegemonic masculine American imperial power over an alleged effeminate and less powerful Cuba, turned out to be a difficult place for women to live.  With a small number of crudely built homes and stores, and a small community with a male to female ratio of 20 to 1 when the fleet was present, the base overwhelmingly catered to men.

The exposé “Guantánamo Blues,” written by an anonymous naval officer’s wife in 1930, complained about life on the island. The article detailed isolation and hierarchy within the women’s community at Guantánamo, parties in which more than normal amounts of alcohol were consumed, and reports that soldiers were visiting the nearby Cuban town of Caimanera and participating in prostitution.  While the information in the article is not verifiable, similar reports of military wives’ feelings of isolation and soldiers’ illicit activities recurred throughout the base’s history.

The W.T. Sampson Schools opened in 1931 to provide a school for the children of military families on base and is the oldest operating Department of Defense School. Currently, the school is divided into an elementary school with 110 students and a high school with 100 students. Historically there were different and conflicting viewpoints about life on the base by military families. While many saw their life as idyllic and utopian in nature, others felt as if life on the base isolated them from the world. The families that did enjoy the Guantánamo lifestyle emphasized the tangible benefits of base life, such as no gangs, little bullying, and attention to students at school. Not to mention the beautiful Cuban weather and environment.

Yet, it is worrisome to many that this lifestyle may leave Guantánamo Bay children and families unprepared for the pressures of living life in the outside world. This has been a historical concern for any American military base family living abroad, and is compounded by the isolated culture of Guantánamo Bay. The geographic location and highly sensitive and classified operations of the base mean that children and families are, to a certain extent, living an artificially constructed and rigidly controlled life. The classified status of the base means work will not likely be discussed at home, and historically, the only outsiders seen would be day laborers from Cuba or Jamaican workers.

In a space that has been historically male gendered, racialized as white, and symbolic of American power over the uncivilized, U.S. military members and their families’ lifestyles bolstered this ideology. Today, though life on the base has improved and modernized in many ways, it does have very tangible and intangible consequences that makes it less than idyllic. Above all, there is the reality that the lives of these families are in an opposing position with the harsh reality of naval work and the lives of the prisoners held at Guantánamo. The families simultaneously benefit and suffer from the security needed to keep the station operating.

Great post…Your reference to the gender orientation of the base is very interesting. Our panel here at ASU will discuss the formation of the base over the first sixty years and we have yet to focus on how the introduction of children and women shaped the base. Thanks for the additional angle.

By Charles Danzey
Women and children living on the base at Guantanamo present many opportunities of research. Many questions arise: What was the typical social life of women and children at Guantanamo? Were there any outlets of relief socially for military wives? Was there anywhere for children to play? These may seem basic and simple to the learned scholar, especially those well versed in Guantanamo history. However, this project is guided to reach out to the public and possibly show them avenues of Guantanamo previously unknown. Your insight does exactly this.
For myself, I had no previous scholarly insight concerning the base. Hold on? A base, on Cuba? You mean where those detainees are held, correct? These are the questions that struck me when I first began my research. Now I am a part of the University of West Florida’s Public History Program, ran by Dr. Patrick Moore, and my mind is officially blown. The research many of the students before me conducted, most importantly their superb collections of oral histories, helped broaden my view of the base. Their research led me to question my own thoughts and yours, as well.
The women and children on Guantanamo did spend some of their lives isolated in a seemingly controlled environment. Yet, because of the information gained by collecting many oral histories from Guantanamo residents by the graduate students at West Florida during the summer of 2012, my perceptions of the interviewees seem to guide me anyway from isolation. I reviewed many of our interviews and they all seemed to point to a distinct close knit, family oriented community. Families interacted with other families on a regular basis, enjoyed many activities inside the base, and could often find themselves enjoying the sea and fresh winds the Caribbean had to offer. If there was an issue that arose concerning the isolation of the women and children of the base, it did not present itself in our research. Thank you for your post as it made me truly wonder about their isolation. It would be interesting to create more inquiries into this topic and possibly ask future Guantanamo oral history participants what they think of your idea.