Regina José Galindo’s Confesión and the Power of Performance Art 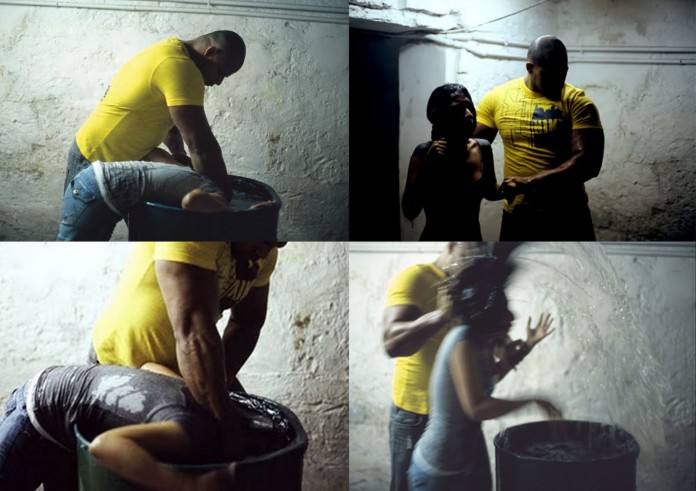 Images from the 2009 video of Confesión, a performance piece by Regina José Galindo

Regina José Galindo is a contemporary Guatemalan artist who often uses performance and her own body to comment on international political and social issues.  Often, Galindo will put her body in difficult, violent, and compromising positions as a way to bring attention to ignored or hidden abusive acts by the powerful over the vulnerable.  She relies on photography, video, and the Internet in order to spread knowledge of her performances; audience reception always plays an important role in her work.  After a 2003 performance, entitled ¿Quién Puede Borrar las Huellas? (Who Can Erase the Traces?), Galindo became internationally known in the art world.  In this piece, Galindo protested the corrupt Guatemalan political system, which had allowed for the presidential candidacy of Guatemala’s former dictator José Efraín Ríos Montt.  She walked from the Congress of Guatemala to the National Palace, dipping her feet in a white basin of human blood, letting her bloody footprints mark her path.

In 2007, Galindo used her body to comment on the United States government’s approval of waterboarding on “enemy combatants” like those held at the naval base at Guantánamo Bay. Waterboarding is a method that uses water poured and forced down a person’s airways to cause the individual to feel the sensation of drowning, without leaving any visible physical damage on the body. Although former CIA Director Michael Hayden called waterboarding one of many “special methods of interrogation” in 2007, many others believe that it is a form of torture.  Galindo titled her piece Confesión, and filmed the performance so that it could be shown to many audiences.  In the video, Galindo is shown having her head repeatedly dunked and held down in a barrel of water by a large, muscular man.  She struggles to get away while the silent assailant methodically thrusts her head into the barrel, before finally throwing her onto the floor.

It is often very difficult to watch Galindo’s violent performances and many observers do not believe that artists should be permitted to perform self-harming acts as forms of art.  Although Confesión may seem unnecessarily self-abusive, it creates a powerful message for her audience about the invisibility of violence in society and our own personal accountability in allowing torture and human rights abuses to continue.  Many people remain passive about the enemy combatants in prisons like Guantánamo, but it is much harder to ignore the brutality of waterboarding when Galindo personalizes the process for the audience.  Her audience witnesses the effects of violence on her vulnerable, defenseless body; she is at the mercy of a powerful aggressor. When Galindo permits her own body to be treated brutally for a cause, the audience realizes that she must believe her message is crucial for her audience.

I attended a 2009 exhibition of her work at Exit Art in New York City, and the power of Confesión remains unforgettable.  Although the CIA states that it no longer uses waterboarding as an interrogation method, detainees remain at Guantánamo and are denied the right to a United States criminal court trial because prosecutors fear that their cases, based on evidence extracted through methods such as waterboarding, would be thrown out.  Her work continues to demand that I examine my own responsibility to detainees at Guantánamo.  She asks her audiences whether it is enough to simply watch her performances without taking action to prevent violence from continuing against those who are unable to protect themselves.