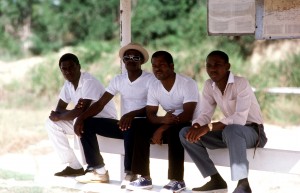 Jamaican civilians wait for a bus that will take them to their jobs at the base dining facility, September 15, 1983. Source: Records of the Office of the U.S. Secretary of Defense.

After the dismissal of Cuban workers at Guantánamo Bay in 1964, the United States hired 489 Jamaican workers to fill their spots. The Cuban workers were replaced because of Cold War tensions between Cuba and the U.S.; the Jamaicans were considered “inexpensive” employees. The U.S. feared that the Cuban workers could be spies passing along information to the Castro government. Cuban workers were also demanding better wages and conditions during their stay at the naval base. All these factors played a major role in the U.S. hiring Jamaican workers rather than Cubans. The Jamaicans were used in laborious tasks such as tending to military mess halls and taking care of the landscape, and required additional housing and dining support services. The United States initially thought that they were saving money by hiring the Jamaican workers but in the end it became a problematic situation.

Jamaican workers fought to negotiate for rights and benefits at the naval base, the situation the United States was trying to avoid when it fired the Cuban workforce. However, the spread of the Cuban Revolution had influenced other nations and groups such as the Jamaican workers to fight for their rights. The Cuban and Jamaican Revolutions took place during the 1960s, coinciding with the U.S. civil rights movement. Jamaican workers’ efforts on the base allowed them to secure greater rights and protections.

The relationship between the personnel on the naval base and the Jamaicans became extremely strained. U.S. naval personnel labeled the Jamaican workers “troublemakers,” and portrayed them as difficult to work with, under-skilled, ungrateful, disorderly, and rude employees. Some Jamaican workers made comments about taking violent actions toward the base unless given fair treatment. The Navy fired and deported the group of workers who had threatened the base.

The base also reflected the United States’ own racial tensions. Many white U.S. navy personnel had already formed their opinions about people of African descent. On U.S. soil, African Americans fought for equal rights; on Cuban soil the same thing was happening with Jamaican workers.

It is important for people to recognize Jamaican workers in history because they represent another case of a group of people fighting for their rights to be acknowledged by the United States. Some would argue that because they are contract workers, the Jamaicans do not have rights. They are not on U.S. soil, nor are they U.S. citizens. Because the workers are not on U.S. soil, they are not protected by U.S. labor laws. Yet the Jamaicans were under the control of the U.S. naval base, which means they should have the right to fight for better work conditions and wages. This was an opportunity for the minority to question the majority in what was considered right and wrong.

The change from Cuban to Jamaican workers aboard the base was not the overnight change the article states. I was stationed there during the mid-80’s and there were still a number of Cubans that passed through the gates every day coming on base to work. My understanding was that no new Cubans would be hired, but those already working aboard the base could continue until they retired. Don’t remember any names, but I knew an elderly Cuban janitor that commuted daily (he had children and grandchildren living in the US). I also knew some younger Jamaicans that had lived and worked on base for many years. Some had a troublesome spirit (as did some American of the day), while others were hardworking and respectful.

I really enjoyed learning the Jamaican perspective at GTMO from your post. ASU’s time period ends in 1964 right at the point of tension and dismissal of Cuban workers on the base. The Jamaican story on the base seems to mirror a great deal of the lived-experiences of Cuban and Haitian workers.

The suspicion that Cuban workers were spies for Castro is not surprising due to the build-up in Communist tension leading up to the Cold War. ASU found that when a building contract in the summer of 1943 was terminated, the U.S. Public Works Department was brought in to relieve the lack of labor. I found it intriguing that the base opted for hiring Jamaicans over bringing in workers “they could trust” from the U.S. It is likely, as you mention, that paying a low salary was compelling to the government and base operators over paying for a number of skilled workers/military men from the U.S. I also wonder if the cost of providing housing for governmental workers was something the base could not bear at the time. If it could not, due to capacity, it is likely they were forced to look outside for labor.

Your comparison of the U.S. Civil Rights Movement of the 1960s with the Jamaican fight for fair compensation and workers rights is brilliant. Not only did the Cuban revolution spread to other countries in years prior, but the activist mentality of the minority may have held on through several generations to rear its head again in opposition to the U.S. military on the Guantanamo Bay Naval base.

Great post and I look forward to learning more from your panel.

Even though I had no idea that Jamaicans were hired as replacements for Cuban workers, I instantly recognized the story. You have an established workforce that is capable of performing the work for which they were hired. Then, for some reason or another, the existing workforce is no longer considered acceptable and the employer looks for replacements, who are expected to work for peanuts. Instead they start organizing and demanding rights. Disgruntled, the employers form biting opinions about the replacements even if it contradicts reality. The same thing happened with Mexican and Mexican-American miners in Arizona. The major differences to this narrative are usually found in the conclusion in terms of whose story ended favorably.

I’d be interested to see how Cubans viewed their Jamaican replacements. Historically, replacement workers have not been viewed kindly by the deposed workers because their presence undermines the leverage of the original workers. In this case, the Jamaicans were simply caught in the middle of political tensions that did not involve their country. Jamaicans and Cubans may have shared revolutionary ideologies, but on the ground level this may not have been enough to save Jamaican workers from Cuban scorn.

The Jamaican workers on Guantánamo seem to occupy a curious place somewhere just behind the front lines of major, global political events. While these particular workers may not have been directly involved with the Cuban Revolution or the Civil Rights movement, the issues they raised and the grievances they lodged both point to the ideologies of these larger events.

I found your connection between the struggles of the Civil Rights Movement on United States soil and Cuban soil interesting. Clearly, members of the navy did not leave their discriminating points of view at home. It really reinforces that U.S. military overseas installations are an extension of the state-side society. Despite the fact that the military was one of the first areas of U.S. society to integrate, it took many years before African Americans who served gained equal treatment. Of course, true equality remains a struggle today. I did not realize that the Jamaican Revolution coincided with the Civil Rights Movement in the United States. I appreciate that you brought that into consideration when analyzing the increase in Jamaican workers’ demand for rights on GTMO.
In my research I also noticed a trend of discrimination against the Jamaican workers in the 1960s and 1970s. In the several interviews I listened to from past residents of GTMO there seemed to be an underlying tension. However, as time passed the attitudes of interviewees reflected the improvements of U.S. attitudes. An interview with an individual who resided on GTMO in the 1990s expressed that the residents greatly respected and appreciated the efforts of the Jamaican workers. He went into great detail about the delicious cultural food that the workers incorporated into the GTMO community.
I noticed you stated that the U.S. dismissed the Cuban workers in 1964. However, several interviews that my team and I have conducted indicate a strong Cuban presence on the base past 1964. It is our understanding that the naval station stopped hiring Cuban workers due to the reasons you mentioned, but allowed the already employed workers continue. This system of attrition allowed the Cuban citizens of Guantanamo City who had depended to the base for employment to retain that income. The inability to rely on the surrounding community for future employees then led to the hiring of workers from surrounding nations. Indeed, an interviewee stated that they doubted if any Cuban workers remained on GTMO today.
Thank you very much for your contribution and insight to the project. I look forward to seeing the product that you and your team create.

First of all, I would love to know what your documented information is for the facts you assert in your article above… I was stationed in Guantanamo from 87-90 and again from 92-94 (My daughter’s and I were evacuated in 94 due to the 40,000 Cuban and Haitian migrants that were on the base, while my husband stayed as essential personnel.) While there, there were approximately 45-50 Cuban commuters who worked on the base every day, and commuted back to Communist Cuba every evening. I personally worked with 4 of them, and knew more. I don’t know where you get your facts for your assertion that the Cuban employees were dismissed after the gates closed in 1963, b/c that is far from the truth. As a matter of fact, there were numerous Cubans who lived on the base as Cuban Exiles, who for whatever reason decided when the gates were closed that they would not return to communist Cuba and they lived on the base full time (I know at least half a dozen of these gentlemen) As for the Jamaicans, they were hired on as “local hires” and earned leave and got a retirement and many of them worked on the base and saved money to provide a better life for their families in Jamaica. I knew MANY Jamaicans who I personally worked with there who loved working on the base! Who did you personally interview for this, either Jamaican or Cuban?? And by the way, the base also held and annual Cuban-American Friendship Day – I didn’t see any mention of that… I commend the fact that everyone wants to do a history of Guantanamo, however I suggest you all get your facts straight before posting your opinions, especially if you’ve never lived there and didn’t talk to anyone who ever did… VERY Disappointed….