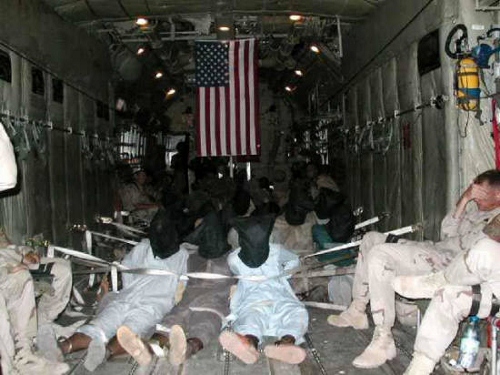 “Don’t they deserve a fair trial too?” Gitmo Prisoners. Photo courtesy of www.liberalstreetfighter.com.

There is certainly no lack of information on the relatively short history of relations between the Cuban and American governments, or of the development and operations at GTMO. While conducting such research I discovered that obtaining more knowledge of GTMO’s past can easily strike up various negative feelings and emotions. What is perhaps the most surprising to me personally is how the United States government seemingly continues to place a desire for imperial power above its responsibility to protect some of the most basic human rights and forms of social justice. This is surprising because it completely contradicts the very conditions that Americans have fought to achieve throughout U.S. history and take pride in. It has always been my understanding that the basic freedoms, protections, and justice we believe in and strive for in our great nation are supposed to be extended to all, not only to whomever we deem deserving.

At Guantanamo Bay’s detention center, there have been innumerable incidences on public record that are obvious violations of human rights recognized by both domestic and international laws. So why has nothing been done to right these wrongs? Current laws do not allow the prisoners at GTMO to be sent to another prison facility in the U.S. This would likely make one assume that the level of threat or danger these prisoners impose is far too great for any nation to risk.

Clearly the U.S. government has created a problem that it seems no one wants to deal with. The detainees at GTMO are not granted due process as they should be according to domestic laws and they are not allowed to enter a plea, guilty or innocent, nor are they granted a trial in the court of law. If these detainees were transferred to various maximum security prison facilities on U.S. territory, they would automatically be granted due process according to our legal system. I would like to believe they would also escape from any torture and other forms of mistreatment that GTMO is known for inflicting on their prisoners. Ultimately, this would be in accordance with the law, both domestic and international, it would alleviate a lot of the tension between the United States and Cuba, and it would satisfy human rights groups and social justice organizations that have been working to close GTMO. This would also allow for other, perhaps more productive and positive opportunities at Guantánamo Bay, while providing the basic rights entitled to all human beings.