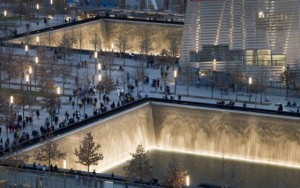 As we work towards creating an exhibit on Guantanamo in New York City, we must remember the impact of the September 11 attacks. Photo taken by Mark Lennihan, Associated Press.

September 11 is, in our collective understanding of the past 10 years, inextricably linked to Guantánamo. The confusion and fear we felt after September 11 was co-opted and fostered by local and federal government. It led to that nebulous, transnational war on terror, to suspicion, arrests, and to yet another use of GTMO’s peculiar American-yet-not-American position in the name of national security.

Our panel will be located in downtown Manhattan, on Washington Square Park. There, on September 11, students, teachers, tourists, and neighbors gathered in confusion, fear and misery. I think it’s important that the panels engage the connection between the September 11 attacks and the use of GTMO as a detention center for America’s “war on terror,” particularly in the context of the attack’s specific impact on the space in which the exhibit will take place.

One of the most interesting connections between Guantánamo and New York City is the concept of spatial relationships. A born and raised New Yorker, I remember post 9/11 New York as a profoundly new, startling, and sometimes terrifying place. The impact of the attacks was immediate, visceral, deeply emotional, and, for many, completely life-changing. Our physical environment was polluted, literally and figuratively. We have seen how the attacks and their aftermath have reverberated in the city in the past 10 years, in ways small and large. New York’s office and apartment buildings take new security measures, we submit to bag checks on the subways, many survivors and brave rescue workers are experiencing grave physical and mental health problems. The landscape, the shape and texture of our beloved skyline, is completely changed and a constant reminder of what happened.

GTMO, on the other hand, is far away and barely understood. For most of us, what goes on there has little or no impact on our daily lives. When I discuss what I have learned through this course with my friends—brilliant, socially aware and informed people—they are shocked. They don’t know where GTMO is, they don’t understand who is there and why, and they don’t know its long history as a useful bulwark of American imperialist interests. The physical remove of GTMO is, I think, a major reason for the lack of understanding of what happens there. We don’t have physical or emotional encounters with Guantánamo in the way we do with the September 11 attacks.

This is what makes this project so important. As students, faculty, residents, and others walk along Washington Square Park, they will be physically confronted with panels asking them to consider Guantánamo. In this sense, this project is an attempt to remove the spatial distance of Guantánamo, and place it in the direct physical context of the 9/11 attacks. I think if the panels can, in some way, engage in examining this spatial relationship, they will be more successful and have a greater impact on the New York audience.

NYU is participating in the Guantánamo Public Memory Project‘s National Dialogue and Traveling Exhibit. Opening at NYU’s Kimmel Center for University Life Windows Gallery in December 2012 and traveling to 9 sites (and counting) across the country through at least 2014, the exhibit will explore GTMO’s history from US occupation in 1898 to today’s debates and visions for its future. The exhibit is being developed through a unique collaboration among a growing number of universities as a dialogue among their students, communities, and people with first-hand experience at GTMO.

For every generation, it seems, there is an iconic and often tragic event that defines them. For the 1960s, it is the assassination of President John F. Kennedy and for the early 2000s, it is September 11th. I was home sick from school when my mother told me what was happening in New York; and while I knew this tragedy was hugely significant, I cannot say that I anticipated the massive scale on which it would change our nation’s perceptions about the world.

We all bring different perspectives to the table wrought from our individual upbringings and life experiences. Thus, when working on any project, especially an endeavor as multifaceted as the Guantanamo Public Memory Project, we must not only manage bias within sources and within the public but also within ourselves.

Much like the informed friends Lily mentioned who were out of touch with GTMO, I came to the Guantanamo Public Memory Project with a similarly limited knowledge of the base. My knowledge involved a small map that flashed on the screen whenever news programs commented on the detention center and came equipped with word associations linking Guantanamo and terrorists. Thus, by transference, GTMO held many negative connotations for me.

Working on this project, however, has completely changed my perspective. After collecting over one hundred oral histories from military personnel, dependents, and contract workers who lived on GTMO, the team at the University of West Florida learned that the base was more than just the location of a detention center. GTMO is and has been home to a dynamic collection of people who have had a myriad of very human experiences.

I am interested to find out how New Yorkers, for whom 9/11 is particularly poignant, will accept positive notions about the base when it will be so easy to associate GTMO with terror and pain. How will we, as contributors on this project, help them look beyond what they expect to see and into the eyes of say, someone like Michael Chandler, who associates many of his happiest childhood memories with life at GTMO?