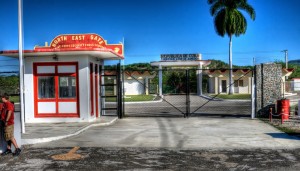 The US-Mexico border is a subject of daily discourse in Arizona. Border violence is constantly reported on the news, universities offer classes on border relations, and politicians are always debating issues of illegal immigrants. Jana Lipman’s history of Cuban and Jamaican workers in Guantánamo discussed concepts and events that were so similar to those happening along the Arizona-Mexico border today that I could not help but draw some comparisons.

As the economic disparity between the United States and Mexico increases and more Mexicans try to cross illegally into the US, American politicians are appropriating increasing amounts of funding to patrol and fortify the border fence. This also occurred in Guantánamo during the early 1960s, when relations and economic conditions between the United States and Cuba were becoming strained and many Cubans were desperate to escape to a life in America. Both fences forced people to take sides. When the border between Cuba and Guantánamo was sealed off, Cubans working on the base were forced to make a decision: remain in Cuba and lose their high-paying jobs, or live in Guantánamo and say goodbye to their families in Cuba forever. Those Cubans who made the decision to live in Guantánamo essentially became stateless- unable to return to Cuba, but unable to travel to America to become official citizens. The same can be said of illegal Mexicans who cross the border to work in the United States; they say goodbye to Mexico and their families there to travel to a country where they cannot become citizens. Whatever the price, many Cubans and Mexicans were desperate to get a chance to live on American land. Fence-hopping and border shootings seemed to be common occurrences in Guantánamo in the 1960s, just as they are at the US-Mexico border today.

Those that did (or do) find themselves living on the American side of the border still faced harsh conditions. At the same time that farmers and ranchers of the American Southwest were participating in the Bracero Program of the 1960s, the United States government contracted with Jamaica to send over workers to serve as cooks, cleaners, and laborers on Guantánamo. In both cases, the guest workers were regarded by many Americans and Cubans as lazy or incompetent. In fact, some Cuban workers on Guantánamo saw the Jamaicans as replacement workers, who had taken the Cubans’ jobs and financial security. This sentiment is still a very familiar debate for those of us in Arizona, where many fear that the influx of foreign workers who are willing to work under harsh conditions and for less money will undermine American citizens’ economic standing.

What can we learn from comparing the closing of the border in Guantánamo to what is happening along the border between the United States and Mexico? Should we use any of these lessons to guide us in developing policies for today’s issues?