A State of Exception 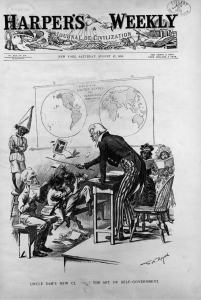 In studying history I have often been surprised, disturbed even, at behaviors that were once considered acceptable by our predecessors. I have come away from lectures and reading angry at what I consider injustices and frustrated by my deep desire to change what happened, or at least to apologize.  I know, of course, that injustice is rampant today in all parts of the world; first world, third world––it doesn’t matter where a person lives, there are many opportunities for the powerful to impose their will over the powerless, or for those without power to slip through societal cracks.  What baffles me about Guantánamo is how it continues to exist as a “state of exception,” especially in light of how public the history and abuses of people that have been detained at GTMO have been.

I would like to think Guantánamo is a relic from another time when imperialism was the way of the world. Yet the United States, itself born out of a fight against imperial expansion, seems determined to invoke the ambiguity of a state of emergency (especially under the “War on Terror”) in order to perpetuate a state of exception. With lofty declarations about the rights of people and democratic process as the basis of our nation as well as a constant public discourse, GTMO is both an embarrassment and a convenience; clearly it is a place to deal with others who don’t fit nicely into U.S. plans, to keep “the wretched refuse” from the American shore. Except, the statue in New York Harbor dedicated to the idea of liberty welcomes the unwanted from other shores to ours with the words inscribed at her feet. It is awkward when the noble ideas of freedom and liberty clash with HIV positive Haitians, or Cuban political and economic refugees. It is especially awkward when humane treatment seems like a special benevolence to endow upon “enemy combatants.”

In our exploration of the possibility of “closing” GTMO and the future vision for Guantánamo, we have to imagine a future in which political ambition, the temptation of a state of exception, and economic avarice are suspended long enough to effect change in the current configuration of circumstances.  Shall we imagine a future that fits nicely into the current lease arrangement specified in the Platt Amendment?  Shall we propose a facility that depends upon cooperation between the United States and Cuba?  Shall we pragmatically suggest the likelihood that nothing will change as evidenced by over one hundred years of American foothold on Cuban soil?  We are stymied by how to answer these questions.

In the end, I fall back on my default for difficult situations: the Golden Rule.  If I were Cuba, I would want Guantánamo back as a part of the whole, not a territorially defined state of exception where a foreign power exercises “out of sight, out of mind” actions it would not conscience on its own soil.  If I were a person detained at GTMO, I would want to be treated humanely and fairly and by the letter of law.  If it were me, I would suggest that the only right thing to do, the only ethical thing, is to truly “close” GTMO and give Guantánamo back to Cuba, thereby excising the “state of exception” from both our countries.

Thanks for this post, Lissa. The ‘state of exception’ has been one of the most interesting, but also troubling concepts for me this semester, too.

While I’m in absolute agreement with you about the imperative of the ‘golden rule’, and while I would love to see Guantánamo shut down and returned to Cuba, part of what is so troubling for me is the growing awareness of just how pervasive the logic of the state of exception is.

I suppose we have Giorgio Agamben to blame and thank for that. I’ve had to read – ‘struggle through’ is probably more accurate – him for a couple of classes. He traces the emergence of the institutionalised state of exception back to the two world wars. Most disturbingly, he states “it is important not to forget that the modern state of exception is a creation of the democratic-revolutionary tradition” (State of Exception, 2005, p.5).

Since reading this and some other related stuff (Elaine Scarry’s ‘Thinking in an Emergency’ is way, way more accessible), it’s hard not to see the rhetoric of the exception everywhere. In the build-up to the presidential election both parties have invoked the exceptional status of the recession in order to advance their (sometime related, sometimes unrelated) agendas, and to claim that only they are fit to lead the nation.

So if the state of exception has become a feature of modern democracies – an institutionalised means of breaking rules – I’m left wondering what exactly we can do about it. Perhaps you’ve already provided a partial answer; rather than fighting against the whole concept of exceptionalism, maybe you have to pull the exceptions apart one at a time. Dismantle Guantánamo, return it to Cuba. Do the same with all of the CIA black sites and other similar sites throughout the world. Then ground the drones, bring the rest of the troops home from recent, exceptional wars…