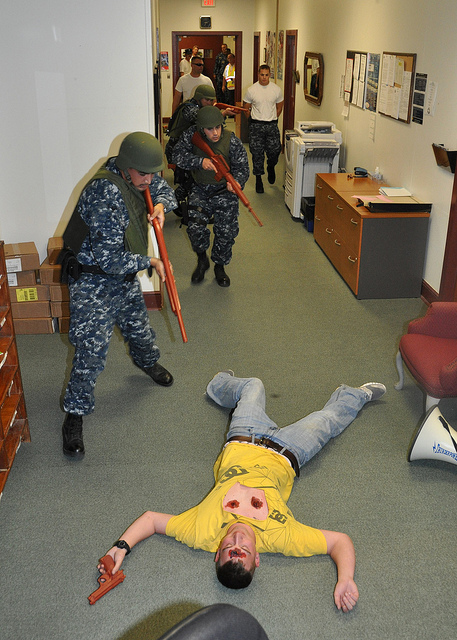 What struck me most about GTMO’s history as I browsed images of the camp was the expanse of violence that Guantánamo seemed to represent; specifically, I was struck by images of training exercises that the troops stationed there undergo on how to take down “assailants.” These training exercises depict the assailants as violent prisoners who will come out armed and dangerous, and seemingly teach soldiers a “shoot first, ask questions later” attitude. While I realize GTMO is first and foremost a prison and houses very dangerous people, I do not believe that the torture and animosity towards prisoners that goes on there is the best method. These unpunished and “acceptable” (in the eyes of the United States government) crimes exemplify how Guantánamo has become the malleable “legal black hole” for the United States to use at its own discretion, falling, in the eyes of the United States government, outside of both federal and international law. This essentially allows the government to do with the land, the prison, and all non-Americans residing there what they please. This has become a growing issue in the “War on Terror” that has moved to center stage in the public eye after the 9/11 terrorist attacks. Just three days after the 9/11 attacks, the Authorization for Use of Military Force (AUMF) provided the president with the authority to use all “necessary and appropriate [military] force against those nations, organizations, or persons he determines planned, authorized, committed, or aided the terrorist attacks that occurred on September 11, 2001, or harbored such organizations or persons.” (www.gpo.gov). While it is never explicitly stated, President Bush used this to justify detaining those suspected of terrorism at GTMO without charge. In the 2004 court case Hamdi v. Rumsfeld, the Supreme Court upheld this act, stating that the AUMF “clearly and unmistakably authorized detention . . .to prevent a combatant’s return to the battlefield.”(www.americanbar.org) These people being held at GTMO solely because they are what the United States government classifies as “enemy combatants,” are being held in a prison that has no outside, fair, or unbiased governance. They are completely at the mercy of people who already believe they are highly dangerous terrorists, which places them in a very dangerous situation, whether or not the allegations are true and whether or not they are acting peacefully in prison. In my opinion, the way the United States has turned Guantánamo into a legal black hole where they can just do what they please and get away with it because no one is there to see it is wrong, and that is something that, in my mind, should be changed, for the right of humanity.

The University of Minnesota – Twin Cities Indiana University Purdue University at Indianapolis is participating in the Guantánamo Public Memory Project‘s National Dialogue and Traveling Exhibit. Opening at NYU’s Kimmel Center for University Life Windows Gallery in December 2012 and traveling to 9 sites (and counting) across the country through at least 2014, the exhibit will explore GTMO’s history from US occupation in 1898 to today’s debates and visions for its future. The exhibit is being developed through a unique collaboration among a growing number of universities as a dialogue among their students, communities, and people with first-hand experience at GTMO.