The Power of Media in Shaping Narrative

Through the process of creating our exhibit panel we have had to look at several photos taken during the Balsero Crisis in Guantánamo Bay. We chose images we liked for the panel individually and then justified our choices in group discussions. I narrowed my choice between two photos that I thought represented nice group shots, showing men at razor wire fences. While these two photos may be grouped superficially by their content (large groups of Cuban men standing by fences) and while they give a sense of the number of people being held together at any given time, they are presenting two very different narratives—two different narratives that are at the core of what our panel will be addressing. 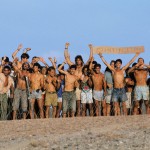 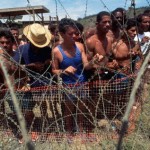 One image showed a group of men with their arms raised (shouting or waving) and holding a cardboard sign saying “Clinton Lied”. The second image was of men huddled close within a doubly-fenced enclosure. Their heads and arms are mostly down, their expressions pensive, and they seem to be acting out a familiar scene according to our expert guest speakers Betsy Campisi and Aurora de Armendi: “Men would just come up close to the fences and stand there, watching” (October 2, 2012). Our class showed both of these images to Campisi and de Armendi and their sentiments echoed our readings. One image showed very clearly the trapped, confused and helpless detainees at Guantanamo Bay. The second image also showed trapped men, but their confinement seemed almost overpowered by their agency and enthusiasm. It’s important to gauge and evaluate the narratives surrounding the balseros for the ways they are being represented in media. This becomes especially apparent when thinking of the racial and political differences in the ways Haitian refugees and Cuban refugees were considered (see: Hansen, Jonathan. Guantánamo : An American History (New York: Hill and Wang, 2011), “The Haitian Problem”)

In deciding between these two images, I was really deciding how I wanted to help portray the stories of this group of people using a very limited amount of photo evidence. Will I be casting them as victims of their circumstances, or actively struggling against the powers keeping them locked up? Campisi’s work in Guantanamo underscored the psychological torment running through the camps and I felt that by displaying the “victim” photo we could give our audience a sense of some of the trauma the detainees went through (see: Campisi, Elizabeth. Guantanamo: Trauma, Culture and the Cuban Rafter Crisis 1994-1996 (PhD Diss, SUNY Albany, 2008)). On the other hand, the “Clinton Lied” photo might be more empowering and give viewers the sense that the detainees hadn’t lost hope of the situation being rectified. The great responsibility of conveying the multi-faceted story of the balseros to an audience as someone who did not personally experience its complexities is being revealed to me in these choices and reminding me of the bias inherent in the re-creation of historical narratives.