Government, Media, and the History of Guantánamo 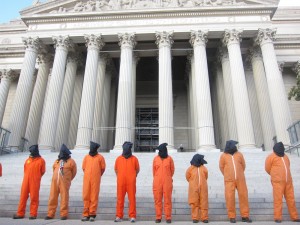 Courtesy of: Bill Oleflach. Taken on Jan 14, 2010 in Washington, DC-In front of the Archives where the Constitution is preserved.

While browsing through the Guantánamo Public Memory Project’s archives, I came across a video of Frida Berrigan’s speech in Lafayette Park at the “Ten Years Too Many” Rally. The focus, of course, was about the detainee camp in Guantánamo Bay. As Berrigan discussed the “10 years of shame” that took place at GTMO, a number of questions arose in my mind. I couldn’t help but wonder if she and her audience knew about the 100+ years of shame that had occurred there; if they were aware of just how many different groups of people had faced disgrace at the base. I wondered how active the American public was in the past when Cuban and Haitian refugees were mistreated. I also considered the role of the media in our opinion of the government. Are we more aware of these injustices today because they are so publicized? Had the people of the past possessed technology like Twitter or Youtube, would the base at Guantanamo have been closed by now?

In this day and age, it seems almost nothing remains classified. It is increasingly difficult for the government to keep dealings secret, and I would argue as we are made aware of these events, it is up to us, as Americans, to take responsibility for what our country has done. We must do everything in our power to prevent our leaders from withholding the liberties of others. That is why I think using GTMO’s history as a catalyst for dialogue on contemporary issues is extremely important. I know I am not alone when I mention my previous knowledge of Guantánamo was limited to post-9/11 affairs. Yet to fully understand GTMO’s present state, we must look to its past. Now that we are able to more easily access information about these events, we can question our government’s motives and demand a more humane response. The media gives the average person a larger role in our government, and we need to embrace that. Efforts like our Guantánamo Public Memory Project are presenting the facts in an accessible way, allowing the public to educate themselves about policy and react appropriately.

We cannot blindly put our faith in the hands of politicians. In the movie clip “I Don’t Need Any,” from Week 50 of the Anti-Torture Vigil, one man angrily stops to inform the protesters that the detainees in GTMO are there because they are guilty of terrorism. It is easy to imagine our government has only culprits in custody, but is an extremely naïve position. When the government is arresting suspects, regardless of the quality of evidence against them, it is unlikely most detainees are guilty. Unfortunately, because they do not have the right to trial, it may never be sorted out. We need to recognize this as injustice and work toward its eradication. Why do we have a constitution if we don’t believe its laws should be applied universally? If we believe in our constitution and the rights it provides, we need to speak up and ensure it is observed.