Knowing the Past to Decide the Future

I have found this examination of the history of Guantánamo Bay fascinating. I have studied a fair amount of history throughout high school and college, but I have never studied anything surrounding Guantánamo Bay. I feel that everyone should know at least some history of Guantánamo along with why we still are able to remain in control of it. I feel that it can be an uncomfortable topic, since the history surrounding it has not been the finest moments for the United States. However, that is exactly why I think that we need to know the history so we can learn from it and not repeat what we have done there anywhere else.

Many people know about Guantánamo post 9/11 but very few know anything before that. I found that learning about the more distant past of Guantánamo has been the most interesting part of this class. I am especially struck by the very beginning of the U.S. lease on Guantánamo including the end of the Spanish-American War and the War for Cuban Independence. America entered at the end of the War for Cuban Independence, which, some argue, Cubans could have won by themselves. This war is the reason the United States originally set up its naval base at Guantánamo Bay. Then in 1903 Cuba and the United States signed a lease allowing Guantánamo to be used as a naval and coaling station to supply coal-driven vessels. The agreement that Guantánamo be used solely as a naval and coaling station has clearly been violated by the United States, a fact that, if engaged, might lead people to change their ideas about the base.

I was surprised most by learning that the U.S. signed a perpetual lease to Guantánamo that gave the U.S. government tremendous control over the landscape. While Guantánamo has been the subject of discussion after 9/11, most are probably unaware of these terms.

These are just a few of the things that I have learned in a fairly short amount of time though class and I think that everyone should take a little bit of time and learn more about Guantánamo. I think that people should not make decisions about things they are not educated on, and that is why if people were more knowledgeable about Guantánamo they could formulate better ideas and decisions about what we should do with it now. It is very important to consider the past while looking at the future to make sure we do not repeat the same mistakes we have made in the past. The more people know about our current situation at Guantánamo the more pressure we can put on the government to change things we don’t like and, maybe, finally put an end to the black hole that is the U.S. naval base at Guantánamo Bay. 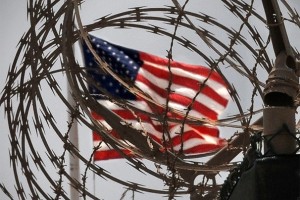 An American flag flies over the detention centers at Camp Delta. Photo courtesy of Bill O’Leary / The Washington Post.

The picture I chose is a very powerful image to me. It is a picture of barbed wire at Camp Delta at Guantánamo Bay with an American flag in the background positioned so the flag appears to be encircled by the barbed wire. The juxtaposition of the barbed wire and the flag has a huge effect by employing reference systems that almost everyone would understand. The barbed wire represents Guantánamo Bay, being trapped, being in prison, and I think overall an atmosphere of violence. The American flag traditionally represents equality, freedom, and justice. The way the barbed wire is positioned around the flag it is as if the freedom of the United States is being constricted and blocked by the barbed wire. Another interesting effect to note is that the flag is blurred out just a little bit while the barbed wire is in sharp focus. This is putting the wire in the forefront of the image implying that the America is being obscured or blocked out by the wire, which represents Guantánamo. This is a very simple image that carries enormous weight behind it and is definitely worth more than just scanning the surface.

One Comment to: Knowing the Past to Decide the Future

I think you are correct in your assessment about the depth of the public’s knowledge about the history of the U.S. Naval Station at Guantánamo Bay. Many of us involved in the Guantánamo Public Memory Project had limited knowledge about the history of the base in the beginning. Most of the information that is publicized often centers on post-9/11 events and the issue of detaining unlawful combatants. As you point out, this is not the only questionable aspect of GTMO. Certainly the imperialistic ambitions of the United States in obtaining the base as well as its continued usage despite no diplomatic relations with Cuba, is also controversial.

It is also essential, however, to see both sides of the argument. The base at Guantánamo Bay remains a naval station, even though the coaling operation has ceased. The Treaty of 1934 reaffirmed the terms of the initial lease, though there are bound to be arguments for and against the legality of the treaty after Fidel Castro’s rise to power. Even with Castro in power, the U.S. continues to make annual payment to Cuba as part of the lease agreement. Today, GTMO has become synonymous with “detention center.” In reality, the detention center operating at GTMO is only one part of the base. Naval operations remain the main function of the base.

To try to gain a new perspective, my fellow students at the University of West Florida and I have focused on examining Guantánamo through the eyes of people who lived at the naval station at different points in its history. In conducting numerous oral histories, we have found that the majority of people who have lived there only have positive memories and things to say about their time there. It was a great place to raise children, virtually free of crime, and an extremely tight knit community.

This is not to suggest that the negative aspect of the base or its history should be ignored or minimized. To gain a broader understanding, however, we should include all dialogues about GTMO. In order to gain a comprehensive picture of the base we should present all the functions that the base has served throughout its history. For example, you have certainly selected a powerful image. While it may represent GTMO to the people detained there or the people who oppose their detention, for the military personnel and their families that have lived there, that image is not indicative of life at GTMO. Rather, if we juxtapose that image with a picture of families enjoying a day at the beach, we can foster debates among our audience and let them draw their own conclusions about the Naval Station at Guantánamo Bay.