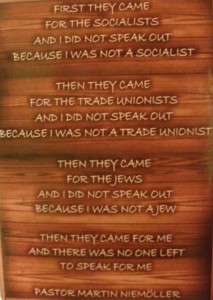 First the rights of detainees are forsaken and no one speaks. Who is next? Civil liberties are paramount to a society’s safety. (courtesy of: Jenny Kalvaitis)

My first thought when approaching this project was that the Guantánamo Public Memory Project’s traveling exhibit should tell the powerful stories of detainees held at Guantánamo. However, as I have thought about it more, I concluded that would simply be white noise. These stories are not new. People have told them. The masses haven’t responded. They still do not care. The goal of this project is to get the masses to pay attention by convincing them Guantánamo matters. Our task, then, should be to target those who do not realize that what is happening in Guantánamo alters American policy and ultimately their lives. We must bring the themes of Guantánamo to the mainland. I think that one of the best ways to make a lasting connection is through discussing the increased security measures that can be felt by Americans.

Immediately after its passage, the USA PATRIOT Act received a lot of negative attention. People became angry about the roving wire taps, sneak-and-peak searches, and use of third parties to provide the government information without a patron’s consent. However, as months turned into years the outrage declined. By May 26, 2011, when President Barack Obama renewed it, the news barely made a splash. Despite its lapse into relative obscurity, people still know what the USA PATRIOT Act is and remember the initial backlash to the measure. The USA PATRIOT Act could provide an excellent bridge to discuss the extreme deprivation of personal liberties in Guantánamo.

Likewise, Americans have resisted the TSA’s full body scanners since 2007. Congress has killed bills attempting to make full body scans mandatory, and Texas has tried to limit the TSA’s measures allowing for full body pat downs. This constant resistance has resulted in reforms that will make the machines safer and less invasive. Even though this battle is still ongoing, this fight demonstrates that if Americans are persistent, change can happen. Moreover, while these body scans are not exactly the nudity and humiliation that detainees are subject to for hours, perhaps it could be deemed comparable on a small scale. If Americans are uncomfortable with their outline being viewed by a TSA official, the notion that detainees are subjected to prolonged periods of nudity is quite powerful.

While I am not advocating we cheapen the treatment of detainees by comparing their lives to those of free Americans, I do think that in order to inspire awareness and action, a connection to the majority’s daily lifestyle is needed. Muslim Americans, for example, do not need to be told that Guantánamo matters. Islamaphobia exists, and their civil liberties have been compromised. We need to target the person who believes that Guantánamo is someone else’s problem, whose life is consumed by fighting too many causes and who does not have time to think about things that do not specifically impact their lives. We must convince those people that once a nation begins to compromise the civil liberties of some, we are all in danger.