Setting the Stage: Picturing the Stories of Guantánamo 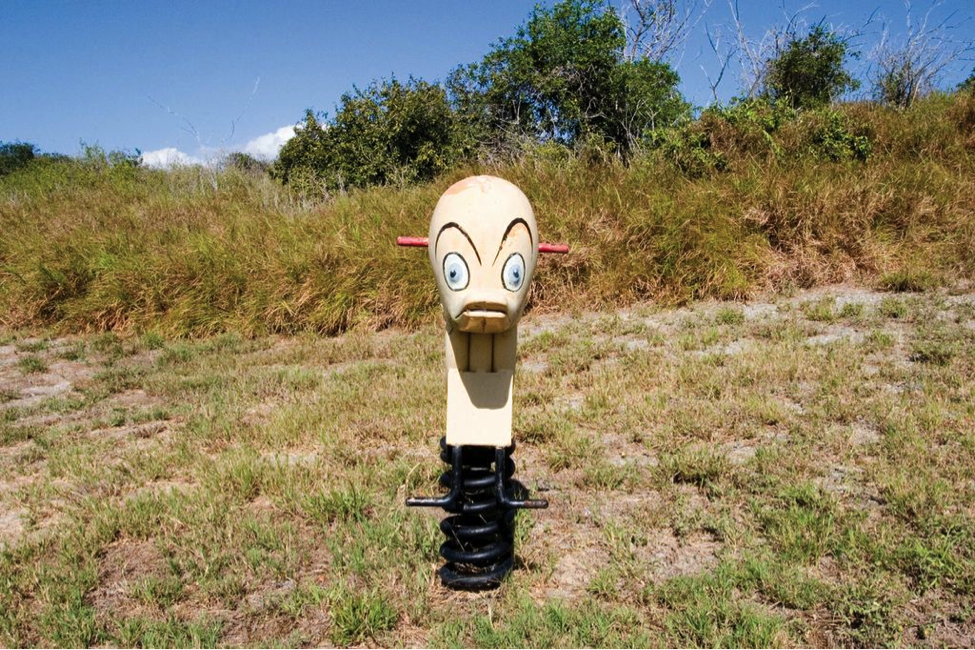 The visual topography of Guantánamo in recent public culture is minimal to nonexistent, narrowly ranging from orange jumpsuits and shackles to barbed wire and chain link to nothing at all, as the issues surrounding Guantánamo fade into the collective unconscious with every passing year. Photographer Christopher Sims takes up the subject of this singular and contentious space in his photographic series, Guantánamo Bay, offering an uncommon, moving glimpse into a site confounded by civil and human rights issues and national security imperatives. Sims grapples with the multiple stories and landscapes of Guantánamo by depicting its day-to-day life. In an interview with BBC News’ Jane O’Brien, Sims says, “In a way it’s like a stage for the world; you have American soldiers, Muslim prisoners, you have guest workers from Jamaica who staff the McDonald’s and do the laundry, you have some Cubans who have lived there for a few decades having fled from Castro. It’s an amazingly unique place where people from all over the world come together to live in perfect disharmony.”[1]

Sims has a background in history from Duke University and an MFA from Maryland Institute College of Art. Once a photo archivist at the U.S. Holocaust Memorial Museum in Washington, D.C., Sims currently teaches at Duke University’s Center for Documentary Studies. Clearly, his background in trauma, loss and war manifest in his documentation of this site. His images move from the ghoulish green cast of the cellblock to the ramshackle military housing to the bleak playthings of children under a vivid blue sky. Corianna Sichel[2] at Flavorwire[3] writes that the “photographs range from mundane to picturesque, taken in together they offer an eerie view into one of the most controversial, and invisible, places of our time.” Indeed. Sims’ images evoke notions of the ghost town, long-abandoned, with only its objects left to tell the story of what happened in that place. But Guantánamo is not uninhabited, its story still unfinished. Sims was not permitted to photograph any people during his 5-day stay in Guantánamo in 2006. Yet, this military restriction seems only to energize Sims’ images with a kind of brittle anxiety, as the viewer waits for the proverbial other shoe to drop. 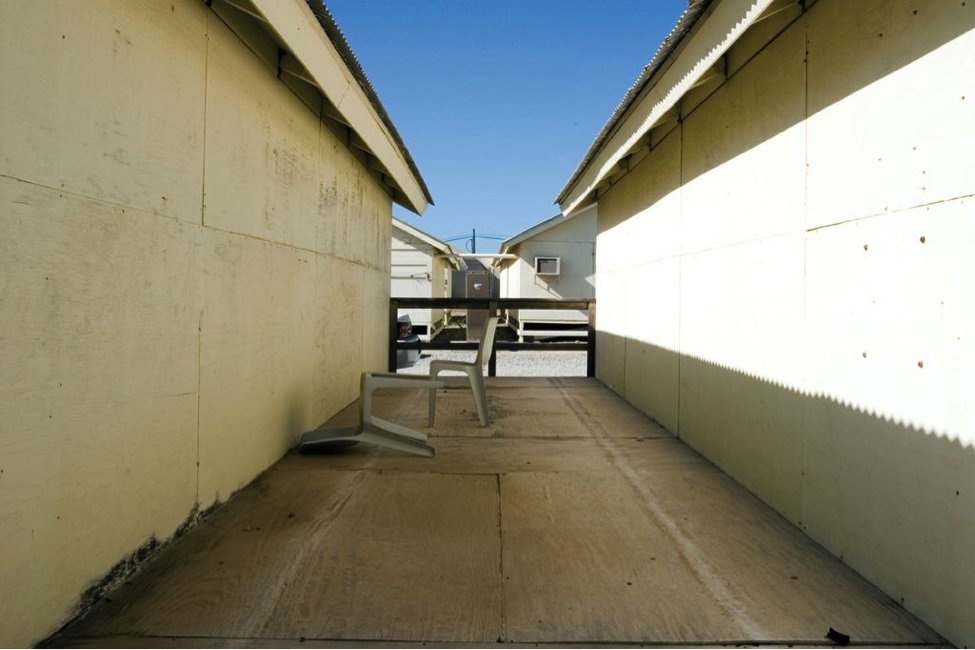 The barrenness, the order, the absence of humans in Sims’ compositions all collude to reveal a certain disinterest, a powerful sense of remoteness and an unflinching gaze at the highly rigid environment that is also grindingly ordinary. Jessica Dawson from The Washington Post[4] says, “Sims shoots with a dispassionate eye, but an Us-vs.-Them tension permeates his pictures. A pair of photographs shot on either side of an interrogation room, both showing a trio of chairs, suggest the larger story. On one side: Leather executive chairs stand erect and unyielding, an outsize American flag hangs behind them. Directly across, two cushioned chairs flank an armless white plastic model. At the plastic chair’s feet, a striking detail: a padlock lies bolted to the floor.” In an interview with NPR[5], Sims remarks, “You think Guantánamo, and you think its going to be a very high-tech, formidable prison system in a base that’s sophisticated and up-to-date [sic] The base as a whole kind of feels like a leftover from the Cold War. … It’s this very unique place — a U.S. military base in a communist country on a tropical island.” Indeed the images Sims produced are of a site that seems both hyper-poignant and astonishingly banal. 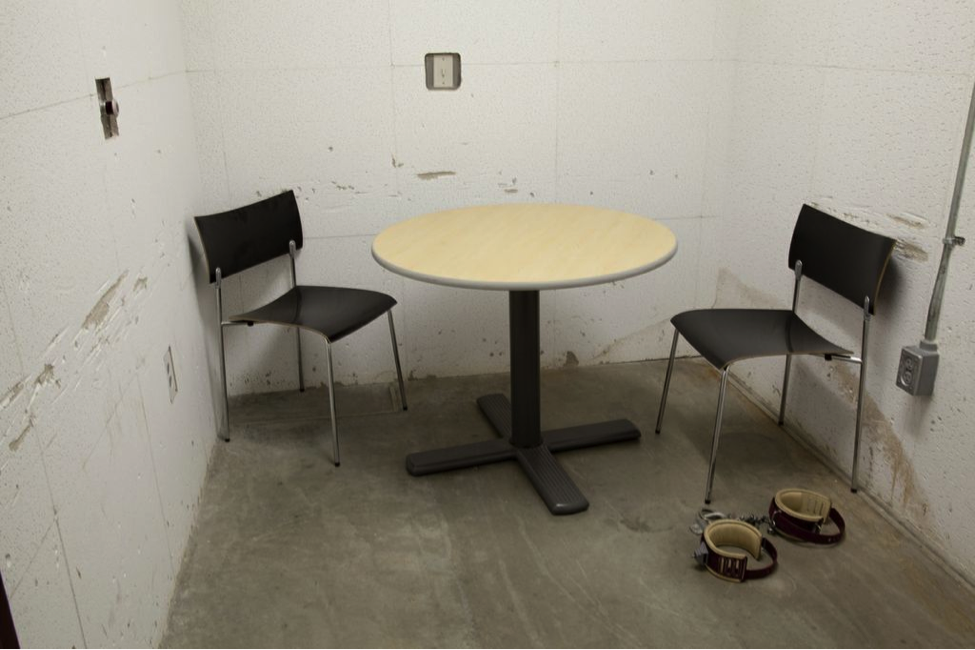 Above all, Sims’ images offer a kind of witnessing of the events at Guantánamo as its history unfolds, casting the objects and the landscape as essential characters and offering them as evidence of a history too difficult, too contentious, too unsafe to be recorded. Sims remarks that he set out “to photograph the environments that people create and inhabit rather than the people themselves, the stage sets rather than the players.”[6] In documenting these props, these backdrops, Sims succeeds in capturing a wide range of experiences at Guantánamo in a fairly narrow cache of images. What emerges in the Guantánamo Bay series is a retrospective of a place intensely packed with the shocking ordinariness of humanity and its shortcomings.

University of California Riverside is participating in the Guantánamo Public Memory Project‘s National Dialogue and Traveling Exhibit. Opening at NYU’s Kimmel Center for University Life Windows Gallery in December 2012 and traveling to 9 sites (and counting) across the country through at least 2014, the exhibit will explore GTMO’s history from US occupation in 1898 to today’s debates and visions for its future. The exhibit is being developed through a unique collaboration among a growing number of universities as a dialogue among their students, communities, and people with first-hand experience at GTMO.