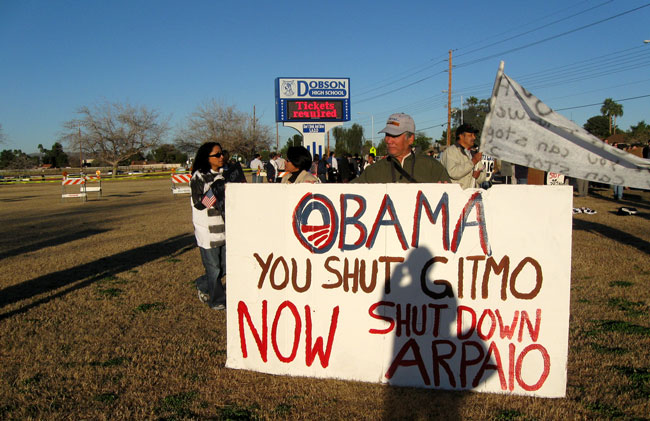 Protesters in Arizona compare the actions of Sheriff Joe Arpaio with actions taken at GITMO. Both are deemed extremely controversial. Courtesy of Codepink

“We’re going to be involved in a project about Guantánamo.” Crickets chirped loudly in my mind as I frantically tried to extract any information I had stored on Guantánamo in my mind. “Isn’t there a prison or something there?” This was the only fact I knew about the place, besides it is located in Cuba and Americans are supposed to hate dictators like Fidel Castro. As each week has rolled by and I’ve steadily learned more about the area, its people and its long complicated history, I have realized it isn’t quite so different from where I live in Arizona.

What is the first thing you think of when someone mentions Arizona? Chances are the words “heat” and “illegal immigration” ran through your mind. Even though the issue of immigration is a fairly recent page in Arizona’s book of history, it is a well-worn one. Arizona is constantly in the news for building border fences, passing controversial and invasive laws about immigration and the conducting of surprise “illegals” sweeps in businesses that are rumored to have hired illegal immigrants. There are citizens who believe all of these actions are wrong and do not help solve the problems immigration present and there are citizens who believe the government and the public aren’t doing enough to stop people from coming into the U.S. illegally.

It sounded familiar to me. Guantánamo has been in the news for the past few years for the controversy the prison located there has caused. It is a legal dead zone. The prisoners there are in limbo – barely classified as humans or as existing. Again, there are people on both sides of the equation: one claiming the interrogation tactics are inhumane and illegal and the other maintaining these prisoners do not have rights because of the crimes they have committed. The United States government does not appear to hear what the Cuban government is trying to say about this situation that is occurring on their land, and the Cuban government refuses to accept the fact that the United States has a contract for the land in use and has consistently paid them for that use.

Does the public have all of the facts in either case? No. There are always going to be essential details that are buried away from prying eyes. It would not enhance either side of the argument if certain details cast both sides in a negative light. This is one perspective Arizona could remember when debating illegal immigration. Arizona should not let immigration take over the state’s entire history, as the prison has taken over Guantánamo. Both sides of the argument need to realize there are other opinions to be heard and they need to listen. The problems will never be resolved if each side believes the other is unequivocally wrong.

It’s easier to say one action should be taken over another. Will Arizona immigration be as fresh 10 years from now, as Guantánamo is?  Most assuredly. Controversy rarely takes a day off.

Your local perspective on Gitmo’s complex history reveals a lot about the public reaction to the prison camp. One interesting comment you made is that of the legality or illegality of immigrating and what impact that has on the rights of the immigrant. One of the major issues at Guantanamo is that of the legal black hole where neither US nor international law applies. The result has been a lack of legal imperative to carry out human rights laws. However, at times public pressure has lead to successful legal and political change. Many undocumented immigrants in the United States face a similar situation where they are not able to take advantage of rights afforded to citizens, which means many of what we would call human rights are violated.
Haitian refugees at Guantanamo faced a similar rightless situation, but in our research we are finding that a few stories made it into the news and perhaps served as charismatic faces that helped the US public face a place that is usually “out of sight, out of mind.” These tend to be stories of the unaccompanied minors stuck in Guantanamo whose parents had been killed because of political activity or women who lost children due to poor medical care. Today, undocumented immigrants have similar charismatic stories; the DREAM Act is popular legislation in part because of the ease of helping successful and hardworking kids. However, both of these discussions fail to address human rights for everyone. In Guantanamo that set the stage for a practice of indefinite detention. Today, what does the failure to address immigrant rights as human rights been for the century of migration?