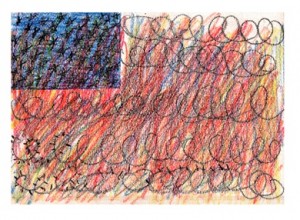 A drawing by a child detained at Guantánamo during the Cuban refugee crisis.

Many Americans know little about the detention camp at Guantánamo and its controversial history of indefinite detainment since the tragedy of September 11, 2001. My education on these matters over the past few months has left me horrified by the blatant abuse of human rights established by the Geneva Convention and civil rights set forth by our Constitution. What struck me most was how little I knew about my own government’s role in keeping these human rights violations stuck in legislation the past decade. On June 29th, 2006 the Supreme Court ruled in Hamdan v. Rumsfeld that Guantánamo’s detainees were entitled to the protections set forth by the Geneva Convention, specifically Common Article 3. The following acts are prohibited by any party.

(a) violence to life and person, in particular murder of all kinds, mutilation, cruel treatment and torture;

(b) taking of hostages;

(d) the passing of sentences and the carrying out of executions without previous judgment pronounced by a regularly constituted court affording all the judicial guarantees which are recognized as indispensable by civilized peoples.

The United States and fifty-two other world countries ratified the Geneva Convention on May 27, 1929 to include these provisions on the treatment of prisoners of war. The U.S.A. is not above these laws and yet it has violated them. The abduction and indefinite detainment of these “alleged terrorists” is no different than the taking of hostages in battle. These prisoners of war become hostages when our government refuses them justice through due process. The inhumane torture and interrogation of detainees is considered a “war crime” and is punishable as a federal offense. Four months after Hamdan v. Rumsfeld however, on October 17, 2006, President Bush signed the “Military Commissions Act” into law which stripped detainees of these rights and granted immunity to those military and government officials accused of “war crimes.” A child artist detained at Guantánamo captures this corruptive spirit in the drawing pictured above. Our flag stands for freedom and liberty for all, but is that an accurate representation?

What do we as American citizens do when our Commander in Chief violates the law so blatantly? The exploitation of GTMO as a constitutional gray area when deciding where to locate the detention facility was defended by President Bush in his 2010 memoirs in which he states that holding “captured terrorists on American soil could [have] activate[d] constitutional protections they would not otherwise receive, such as the right to remain silent.” The violation of human rights at the Guantánamo detention facility was then deliberate. Many of these violations have been documented and even publicly admitted by government officials. How then do the injustices continue, despite a change in executive office?  No matter the allegations against them, the prisoners held at Guantánamo deserve fair trial. Fear brought our country to this point after the events of 9/11. We citizens must speak out to prevent further injustice and to ensure that every man regardless of “race, color, religion or faith, sex, birth or wealth” is afforded these inalienable rights.