The Affect of Castro’s Revolution on Guantánamo’s American Population

In 1952, an eight-year-old, Dale Ward Gordon, arrived at Guantánamo Bay with her parents and older brother.  She stayed on the base as a dependent for eleven years until aspirations for a college education drew her back to the United States in 1963.  An interview that I recorded with her in September 2012 gave me new insights into how the Americans living on the Guantánamo base felt about Castro’s reign and how his dictatorship directly affected them.

In the words of Mrs. Dale Gordon, “In the beginning we thought Castro was going to save Cuba because he was, he was so wonderful.”  When taking into consideration the American consensus of Castro’s reign today, this statement shocked me and got me thinking about how Americans living on the Guantánamo naval base in the 1950s perceived Castro’s rise to power.  Not only the Cubans, but also many Americans on the base felt that Castro offered a better standard of living for his people.  As Mrs. Gordon explained, Castro’s allure shortly wore off, and many families within the American base were affected by his dictatorship in economic and social terms

Mrs. Gordon details how the American servicemen’s attitudes regarding their Cuban employees changed following Castro’s Revolution. Although many have posited the naval base as a sort of “Mayberry,” an idyllic life, it is apparent that social tensions did prevail within many households.  In spite of the clear tension that separated the Americans and the Cuban workers in terms of their national identity, many servicemen and their families strove toward a common humanitarian goal; defying laws enforced by Castro and working toward a better life for the Cuban people.

As Castro’s cruelty toward his people became evident, many American servicemen and women breached the accepted racial relationship between the American’s and Cuban workers and began to help the Cubans where they could.  Mrs. Gordon provides evidence of the Americans distinct relationship with the Cubans by recounting the help her family had from their Cuban maid, Mary Paxton, and by their ability to hire a Cuban seamstress for two dollars a day.  Mrs. Gordon specifically recalled the seamstress as an important part of their household, explaining that she learned to sew in order to make money for her family.  Similarly, their maid Mary became part of their household, relying on the Gordon family for her own welfare.

The Gordons, aware of the hardships the Cuban people faced, attempted to provide the goods they needed.  For instance, Mrs. Gordon recalled that her father snuck medicine over the chain link fence dividing the naval base from sovereign Cuba for a sickly Cuban woman.  As part of the payroll staff, her father also ensured that the Cuban workers’ salaries were never released to Cuban officials, so that American families were able to give their workers extra money if they chose.  In this regard, the American experience was tied directly to the Cuban experience, and Castro’s reign directly affected the families living on the base. 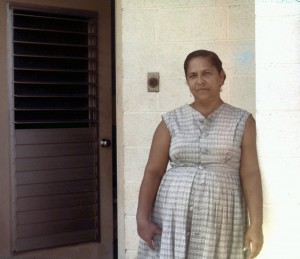 Posted by Meghan Reed—M.A. Candidate at The University of North Carolina-Greensboro

The University of North Carolina – Greensboro is participating in the Guantánamo Public Memory Project‘s National Dialogue and Traveling Exhibit. Opening at NYU’s Kimmel Center for University Life Windows Gallery in December 2012 and traveling to 9 sites (and counting) across the country through at least 2014, the exhibit will explore GTMO’s history from US occupation in 1898 to today’s debates and visions for its future. The exhibit is being developed through a unique collaboration among a growing number of universities as a dialogue among their students, communities, and people with first-hand experience at GTMO.
Tags: Base Workers, Human Rights
Tweet
Previous  |  Next