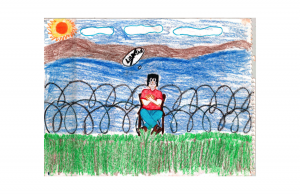 “No Libertad.” A Cuban child detained at Guantánamo offers a bleak perspective on what it was like to be held at the U.S. naval station base during the Cuban refugee crisis.

Before I started reading about the history of Guantánamo, I thought it was just a jail that the United States used to house its post-9/11 political prisoners. As I began delving into Guantánamo’s history, I was surprised to learn, that the site was also used to detain Haitian and Cuban refugees. I had always pictured political refugees as adults who had taken a stand against an unfair government, but it never occurred to me to that political refugees could included children.

In the case of the Haitian children, many were orphans who had watched their parents die at the hands of political opponents. Many were afraid to return to Haiti because they also believed that they would be executed. Some had family in the United States that they hoped to reach to improve their chances of living a free life. Given this information, I assumed that the American government would take pity on these children and expedite their asylum process; how wrong I was.

Instead of immediately reuniting the Haitian children with their only living family members, the American government forced the children to take blood tests in order to prove their “claimed” relationships and prove they did not have HIV. Cheryl Little’s pamphlet, Keeping The Haitians Out, explained that many of the Cuban children did not have to undergo these tests and some Cuban children were readily admitted into the United States. What made one group of emotionally scarred children more deserving of asylum than another?

As I continued to read Little’s pamphlet it became clear that asylum claims were less about merit and more about national origin. Throughout American history, there have been waves of immigration. Immigrants from certain countries are deemed worthy enough to enter the United States while immigrants from other countries are marginalized. It is incredibly unfortunate that in this situation, the American government could not put away its nationality preferences, even for the benefit of children.

While I was working on the Arts of Detention panel, I stumbled upon this image created by a Cuban child. In this image the child’s arms and legs are crossed and it looks as if he were bound.  The child is clearly a prisoner, crying because he has lost his libertad, the Spanish word for freedom. For me, this image is particularly moving because it gives voice to an often overlooked demographic, children. Once I learned that there were children involved, the legal and moral atrocities at Guantánamo took on a whole new dimension. It is my hope that by displaying the artwork of children and other marginalized demographics, future audiences will realize the importance of intervening sooner rather than later.