The Haitians and HIV 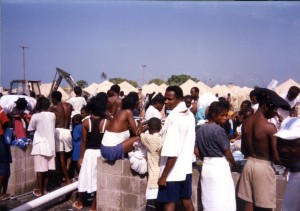 While researching Guantánamo, I was amazed at how little I actually knew about the history of this US base. For me, Guantánamo was a place where terrorists went to wait indefinitely for a trial that would never happen. My understanding has since changed dramatically. Although the post 9/11 history of GTMO has become a topic of regular debate for political leaders and citizens alike, the experience of Haitians seeking political asylum in the United States is something that struck me. For these people, Guantánamo was a place of hope, but these feelings of relief were short lived, especially for the ones who tested positive for HIV.

For these Haitians with HIV, Guantánamo became a legal black hole. They were removed from their friends and families, placed in a separate holding area, and forced to wait for the United States to decide their fate. Although most Haitians did not make it to the United States due to a change in legal terms for political refugees, HIV positive Haitians were basically told they would never make it to America. They were held in confinement that was similar to that of criminals while the legal battle continued in the United States. Eventually, the terms of accepting HIV positive Haitians became more stringent than for Haitian refugees without the virus. This meant a choice between staying at Guantánamo in less than humane conditions or taking a chance and returning to Haiti. For the Haitians that returned home, this meant the possibility of brutal attacks or even worse – death.

When I read about this part of Guantánamo’s history, it made me consider the human element of the situation. For the Haitians who were seeking political asylum in the United States, receiving a diagnosis of HIV was not only devastating to their health; it disrupted their peace of mind. Guantánamo was a place of hope and dreams, but for those with HIV it became a nightmare. During my research, I came across an image that solidified the pain and suffering the HIV positive Haitians must have felt during their detainment at Guantánamo. It is a painting of Camp Bulkeley, the refugee camp for the Haitians who tested positive for HIV. Although I had read about the poor living conditions and treatment of these refugees, seeing their difficulties portrayed in a painting made it more real for me. When I look at this image, I get a sense of the loneliness and desperation these people must have experienced. The painting also stood out to me due to its color – or lack there of – the black and white depiction of this scene once again gives it a feeling of complete isolation. After viewing this image I had a better understanding of the difficulties these HIV positive Haitians went through. My hope is the people viewing this painting feel some empathy for the desperate circumstances the Haitian refugees faced during their detainment at Guantánamo.

Baker–Similar to you, I was unaware of the history of Guantánamo Bay Navy Base (GNB) prior to beginning this enlightening project. Prior to this project, I understood that the base served as a detention center for those behind the disastrous event of 911. Besides, I was unaware of the whole notion behind Camp X-Ray as well, by which the U.S at the time used to interrogate prisoners before transferring them to Guantánamo Bay Navy Base. I was unaware of the fact this base was purposely intended to put prisoners away from lawyers, the rule of law, court protections and the media coverage as well.

I utterly agree with you that this project was its many aspects as an educational of the whole stories associated with starting from the day Cuba leased the camp to the U.S. I have two counterpoint arguments regarding the Haitian refugees with HIV positive. Firstly, I agree with you that the above image of the Haitian refugees depicts logic of loneliness and an extreme anxiety. In addition, I can sympathize with the hardship and pain those Haitian refugees must have experienced. the fact that Haitian refugees have sought asylum and have been denied due to the U.S. government believing that Haitians didn’t face political persecution at the time. However, it’s no doubt that they did indeed face political persecution.

Secondly, putting myself in the same side with the U.S government, the U.S was right to not grant asylum for those HIV positive Haitian refugees mainly because the discovery of the disease was new to the world. I can also sympathize with the U.S government because they had the right to protect their population about a potential spread of the virus. Moreover, according to the U.S immigration law, it asserts that anyone who is HIV positive is inadmissible to the U.S. This means that such person that is HIV positive is barred from entering or obtaining lawful permanent resident status in the U.S.