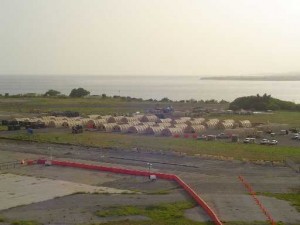 While scanning the port facilities at the US naval station at Guantánamo Bay, Cuba on Google Maps, the site of McCalla Airfield caught my attention. Obviously it is no longer in use as an airbase; the runways are devoid of markings, and more importantly covered in tents and sheds. It has been re-purposed.

McCalla Airfield at GTMO is a particularly extensive example of re-purposing at GTMO, which happens at many military bases. However, usually a military facility is either re-purposed for other military uses (hangar space formerly used for aircraft parking on Ford Island at Pearl Harbor was used for storage), or sold off for other uses. McCalla is still part of GTMO, but is not used to support naval operations.

What struck me is how the military has allowed this land to be used for so many different purposes. In addition to the now infamous detention facilities, here you have an entire airfield being turned over to a different use. If I had to make a guess, I would say that Leeward Point Airfield was kept while McCalla was removed from service because it lacks a capacity for growth. Even though Leeward Point is opposite the bay from the port facilities, it has a much longer runway.

McCalla Airfield ceased to be used as an airfield around 1970, and remained empty until the refugee crises in the 1990’s. The Cuban and Haitian refugee camps were set up on the former runways, which, being flat and empty, eliminated the need to clear space for the camps. The field was then empty again until 2007 when ‘Camp Justice’ was erected, the tent city built to house the lawyers for the Guantánamo military commissions.

The re-purposing of the old airfield points toward future uses of the base. Much talk has been made of closing the base completely, but the US Navy is still a tenant, and one unlikely to desire to leave in the future. More likely is an end to the detention of ‘enemy combatants’ on the base, leaving the detention facilities and McCalla Field open again.

The question that comes to my mind is “what decides how we use these facilities?” The navy, which no longer needs McCalla, would probably be content to have it overgrown with weeds. However, it seems to me that some other use could be found for such an expanse of flat, empty land.

As for the other facilities at GTMO, some things are harder to re-purpose. The detention facilities are only really good for detaining people, and moreover many would be uncomfortable doing anything with the properties. Using the site as a museum may be a promising alternative.

If there was a significant reduction in operations at the base, and a significant thawing of relations between the US and Cuba, more possibilities arise. The naval port facilities, even if still owned by the U.S. Navy, could be used as the nucleus for an expanded harbor, to promote economic growth for Cuba, and the Leeward Point as a foundation for a future Cuban airport. But the politics surrounding the site complicate the possibility of the base being used as a launching ground for a Cuban port city that would benefit the people of the island country.