Domesticated Gitmo, Or Why We Should Care about Harold and Kumar

During previous graduate work, I taught two sections of Introduction to Cultural Anthropology, a 1000-level course that fulfilled a social science credit. Near the end of our textbook, there was a section about “War and Violent Conflict” in various cultures. Since my content specialization concerned American civil defense during the Cold War, I generally supported the lectures and readings with two short films: What Is Communism? (1963) and Duck and Cover (1951).  One thing that always struck me was how absolutely hilarious both films were to a room full of freshmen; whether they were shouting accusations of Communist sympathies at one another or scoffing at a family diving under a picnic blanket, they immediately and nearly universally recognized mid-twentieth century civil defense as kitsch. 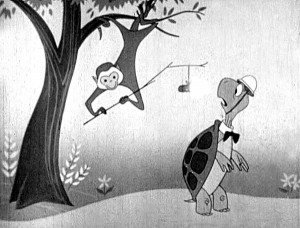 Bert the Turtle, the star of DUCK AND COVER (1951), prepares to defend himself from an armed evildoer. Courtesy of the Wikimedia Foundation.

In our subsequent discussions, which usually focused on representations of military enemies and perceptions about public safety, we would try to unpack some of the assumptions we held about our own safeness and what might constitute appropriate forms of defense. These conversations were always marked by emotion, too: namely, the total shock with which students who barely remembered 9/11 considered the possibility that the War on Terror might include equally problematic attempts at national security and emotional management. The contradiction inherent in a cultural acceptance of torture, wiretapping, and the use of military force (not to mention increases in sales of bunkers and duct tape) aligned with the ability to laugh at diving under desks is not insignificant—it is yet another example of the ways in which we distance ourselves from uncomfortable realities about Americans’ place in the world.

In her 2011 article, “Comfort, irony, and trivialization: The mediation of torture,” Marita Sturken thoroughly traces the prevalence of kitsch and irony within American culture in the years since 9/11. As she convincingly argues, the trivialization of torture and indefinite detention is not limited to those who support the concepts. Even a superficially negative and intentionally ridiculous depiction of Guantánamo (e.g., Harold and Kumar Escape from Guantánamo Bay, in which two marijuana-loving friends are the subjects of racial profiling and subsequently find themselves extradited from Amsterdam to GTMO) is ultimately contingent on the idea that Guantánamo and its associated security policies are absurd. The net result is that, even in moments of great irony and horror, examples of Guantánamo humor have the potential to release the person experiencing them from taking on political responsibility— rather, they create comfort through distance.

The concept of distance is important here, and it is what made me think of my students. Without personal context for the Cold War, they could not make sense of it except to laugh; with nothing but personal context for the War on Terror, they could not make sense of it except through impressionistic images. The term “public memory” suggests, among other things, that we need to think about what Guantánamo means to people beyond the facts of its location, events, or policies. While the particulars of detainment and torture are non-negotiable, crucial parts of encouraging meaningful social change, these data are not necessarily the stuff of day-to-day experience in the local context our team has been asked to consider. For some groups within Indiana, daily life does mean direct encounters with law enforcement and fear of detainment or violence. Most, however, know Guantánamo through news stories, movies, and television dramas. With that in mind, we ought to acknowledge, even in passing, that these media have real and politically consequential power.

2 Comments to: Domesticated Gitmo, Or Why We Should Care about Harold and Kumar

This post was wonderful! It articulated some of the more nebulous ideas that have been floating around in my head while working on the GTMO Project–especially the tricky nature of distance from historical events. As a teenager during the post-9/11 Iraq invasion, fear made it all too easy to overlook problematic aspects of the era in the name of national security, and easier still to miss the similarities to Cold War suspicions. Being in the midst of a time of national uncertainty effectively stripped away any larger historical perspective that I might have had.

This post also sparked a memory on the importance of personal context—perhaps this makes me just as naïve as your students. I’m an avid collector of souvenir plates. A few years ago, I came across a plate from Guantanamo Bay, Cuba. Laughing to myself, I bought it: why would anyone want a souvenir from a place best known as a site of detainment and state-sponsored torture? From a post-9/11 perspective, it was nothing more than an entertaining piece of kitsch. Now, after having delved into the history of Guantanamo Bay, that plate is more problematic: no longer is it solely a conversation piece for visitors; now it is imbued with a deeper resonance. Getting to know more about GTMO’s history has been fascinating, but it’s also brought a sense of obligation to make others more aware of the site and some of its issues. Instead of comfortable distance, I hope the GTMO Public Memory Project will spur others to conversation about what the future of Guantanamo should be.

You made some decent points there. I looked on the internet for the topic and found most persons will agree with your site.