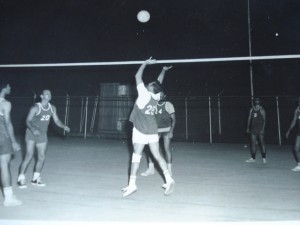 Once the US-Cuban border closed after Castro’s Revolution in the 1960s, soldiers stationed at the U.S. naval station at Guantánamo Bay needed to find entertainment within the confines of the base.

I came to Pensacola to study at the University of West Florida, but almost anyone you might ask would consider this a military rather than a college town.

Comparatively, when many people think of The U.S. naval station at Guantánamo Bay, Cuba, they immediately think of the military installation there.  This means thousands of military personnel have to call GTMO home for months and even years.  This fact raises several questions.  What do these soldiers do in their spare time?  Where do they go for fun?  How do they deal with the isolation of GTMO?  These are all questions that students at UWF asked over this past summer when we interviewed over a hundred former residents of GTMO.

Pensacola plays host to a large, often temporary, population of young sailors and soldiers.  These soldiers may reside and work on the base, but Pensacola is where they go for fun, shopping, and relaxation.  You cannot go downtown or to the movie theater on a Friday night and not take note of a few dog tags.   Thus, the bases in and around Pensacola, are not islands unto themselves, but rather a dynamic part of the surrounding community.

For GTMO, it is a different story.  According to Jere Jailite “everything outside the fence line doesn’t exist,” because your job is also your social life.  If you cannot find what you are looking for on the base, you will probably have to do without for a while.

In addition, many former military personnel choose to retire to Pensacola, often because they once held a post here and wished to return someday. Every stay in GTMO has an expiration date; although, many people choose to return to the base for repeat visits.

Many soldiers who were young and unmarried during their stay at GTMO mentioned that lack of young women at some point during their interview including Bill Bond.  Bond, who was a young man on the base in 1969, remembers a “lot of outdoor activities” considering the excellent weather.  He played soccer, football, volleyball, and basketball when he was not fishing, hunting, diving, swimming, or boating.  One of Mr. Bond’s few complaints, however, was that GTMO wasn’t a very good place to be a bachelor”; the only eligible women were nurses and schoolteachers of limited number and varying age.

Jere Jailite, around 19 when he lived in GTMO in 1964, enjoyed poker nights with his fellows and visiting the outdoor movie theaters, called lyceums.  When asked what he missed most while at GTMO, Jailite responded with a host of things like current television, McDonald’s, and Dairy Queen but he did not forget to mention that there “weren’t any young ladies.”  He did not mind too much though, because he knew his post was temporary.

David Pruett, about 22 while at GTMO in 1962, loved the Guantánamo lifestyle.  As he relaxed at the club in view of the ocean on any given day after work, he and his friends would say to themselves: “do you realize rich folks pay thousands of dollars to live like this? “

While the isolated nature of GTMO limits entertainment to on-base pursuits, these pursuits are by no means limited and are, in fact, still expanding. GTMO now has entertainment options like the Internet, McDonald’s, and  Starbucks.

2 Comments to: Social Life at GTMO: Soldiers at Play

Jane,
First off, you did a fantastic job on this blog post. I too, have some insight on US servicemen/servicewomen and what they did in their spare time at GTMO. In 1951, my Grandfather was mobilized by the US Navy for a deployment to the Korean peninsula during the Korean Conflict (1950-1953). He was an enlisted sailor, a coxswain, and his job was to ferry officers to and from shore on a patrol boat that he was in charge of. The ship he served on, the Battleship USS Wisconsin, was docked in Guantanamo Bay for three weeks in early 1951 after their initial departure from the US Naval Shipyard in Norfolk, VA. The ships final destination was the Yellow Sea off the western coast of the Korean peninsula, but the ship made port in GTMO twice; on its departure to Korea, and upon the end of its deployment en route to Norfolk, VA. While ashore for those three weeks in early 1951, my Grandfather fondly spoke of how much fun he had in his off-duty hours. He and his fellow sailors from his ship squared off against US Marines and US Sailors from other ships to volleyball matches and football games, as well as fishing tournaments on multiple occasions. He also had mentioned the Lyceums, or the outdoor movie theaters on base where he first saw the films, “The African Queen,” and “The Great Caruso.” He always does recollect the weekends when he and his friends ate dinner and drank at the bars. My Grandfather also noted that he admired the work ethic of locals that worked on the base. Whether they were Cubans, or of another nationality, I am unsure. Despite the multiple references of young servicemen and the lack of women on the base, my Grandfather often reminds me that this did not bother him one bit, considering he was happily married to my Grandmother since 1949 and still is happily married today. There was one photo he had of him and some fellow sailors at GTMO. It is a beautiful photo taken of them on the beach at Guantanamo; volleyball in hand, a sunset in the distance, and palm trees up and down the shoreline. It is, as he says, the most beautiful beach he has ever set foot on, even to this day.

Jane,
This is a great post. Sometimes, with the portrayal of GTMO in pop culture and in the media, it is easy to forget that those stationed at Guantanamo Bay are and were not all hardened soldiers, people who have done things which are possibly unspeakable due to the circumstances of the situation. These men and women are more often than not regular people who ended up in an isolated and unfamiliar place that they had to call their home. The adjustment was surely not an easy one. Life in GTMO was not the same as life in America, despite the construction of a civilian town at the base. Having to deal with the lack of certain things taken for granted in America, such as the lack of young women to occupy some of the soldiers and sailors free time, would certainly have been difficult for some soldiers. I think it is important to remember the sacrifices that soldiers and sailors have to make, whether or not one agrees with the reasons they are stationed or deployed, and recognize that those individuals are making a sacrifice for what they believe is in the best interest of our nation.