“I Never Missed Out on Anything”: GTMO Children and Growing up Abroad 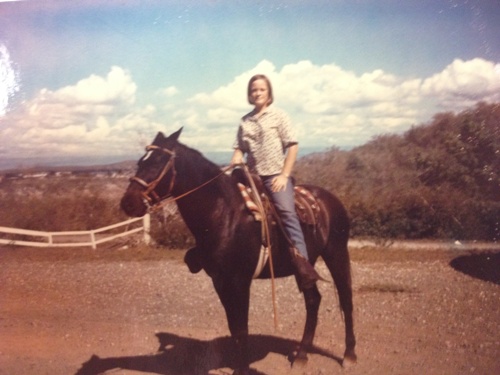 Daline Riley, a military dependent, rides her horse on the Guantánamo Bay naval station in Cuba.

“I never missed out on anything,” said Daline Riley, who was born at GTMO in the 1950s and spent several years at the Caribbean base as a teenager. Daline was one of several GTMO children interviewed in the summer of 2012 through the University of West Florida’s Public History program. “It gave me a better perspective; it made a better person for me,” said Daline of her formative years at GTMO. Although some outsiders might believe military children raised in remote locations have missed out on important life experiences, military dependents also argue that an overseas base provided them with their most important life experiences, enjoying remote locations that broadened their knowledge of the world.

For GTMO children, the entire Caribbean basin was a classroom. John Kania, who was stationed at GTMO in the 1950s and again in the 1970s, remembered servicemen taking their children on trips to Puerto Rico. John’s son Matthew said his father took the whole family to Haiti. “We learned some history and culture from the country of Haiti,” said Matthew.

GTMO children learned the language and culture of their host country. As a 1950s GTMO child, Patricia Page went off base “very often, quite a bit,” for family picnics and swimming in the Yateras River. She met Cubans, visited their homes, and remembers them as “very giving and very proud.” Patricia learned Spanish in school. “In the third grade, you learned some words and you learned some communication,” she said. She learned “O Come All Ye Faithful” in Spanish at Christmas.

GTMO children enjoyed unique recreational activities and social outlets. They rode horses at the base, provided through special services. During full moons, Daline organized moonlight horse rides with other teenagers. John Kania’s daughter Elizabeth also rode horses. “If you wanted to ride a horse, you’d go to your father and say ‘Can I have two bucks to go ride a horse?’” said John.

I strongly identify with these GTMO children. As military dependents, my sisters and I grew up at remote bases similar to GTMO. We never felt isolated and never believed we missed out on normal experiences. We spent two years in the English countryside, and although we lacked strip malls, we spent our weekends at medieval castles and manors. Growing up, my sisters’ favorite place was Guam, an allegedly “isolated” island where they learned about Chamorro and Japanese cultures. My childhood experiences successfully prepared me to live and work in Asia for three years.

GTMO children had similar perspectives on their childhoods abroad. GTMO was “a very bright spot in my evolvement as a person,” says Patricia. “Healthy, healthy childhood memories.” You “learn to get along with everybody. You’ve got to,” said Daline, and said she would return to GTMO if she had the opportunity.

Our society privileges certain life experiences and denigrates others, and by extension privileges certain individuals. Children raised in typical urban and suburban environments are deemed well-socialized and capable of functioning in the “real world,” while children raised in rural areas or at overseas military bases are deemed disadvantaged with diminished chances of real world success. Military children are rarely allowed a voice in discussions about the value of an atypical childhood. Their perspectives are not irrelevant to a full understanding of GTMO and are another reason why the Guantánamo Public Memory Project is so important—we allow the subjects of inquiry to speak for themselves.

Posted by Jeremy Hatcher – M.A. Candidate at the University of West Florida

One Comment to: “I Never Missed Out on Anything”: GTMO Children and Growing up Abroad

Jeremy, I really enjoyed reading your post in particular your personal connection to the topic. I’ve been trying to decide which part of this semester’s research into Guantánamo sticks out the most in my mind as being a surprise and I think it’s these stories from the families of American soldiers living on the base.

It has recently become hard to think positively when discussing the base and America’s involvement in the territory considering its recent history. It is your experiences and the experiences you cited in this blog that shed light on a different and equally important aspect of United States Military Bases, GTMO in particular.

Criticism for the US Government is all too common and there exists a lack of dialogue surrounding the soldiers and their families that are the Americans that are TRULY and PERSONALLY affected by United States foreign policy, the War on Terror and all conflicts abroad.

This is not to say that such governmental critiques are invalid or incorrect, but stories about American families involved in these situations are, in my mind, of outstanding importance.