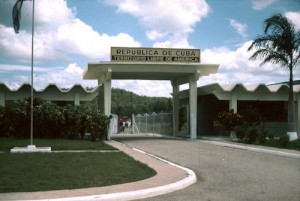 The story of Dennis Miller, who runs the Cuban Club on GTMO, struck me as profoundly troubling. Having been born on the base to a Cuban exile in 1965, Dennis has no country—he’s considered neither Cuban nor American. His story illustrates the difficult decisions Cubans faced during the early days of Castro’s regime, but also underscores the extralegal nature of GTMO, which persists today.

My class’s oral histories revealed a nostalgic view of life in Guantánamo Bay among Americans who lived there in the 1950s and 1960s. Interviewees described visits to the teen club, sailing in Guantánamo Bay, and going to the outdoor movie theater—activities that all contributed to a seemingly innocent, family-friendly culture on the base. It’s no wonder that many former residents came to think of GTMO as a tropical Mayberry.

Yet these sunny accounts conflicted sharply with readings about the divided experiences among base workers—Jana Lipman’s book, in particular, testified to the unfair wages and treatment that maids and other workers received from Americans. Housewives who couldn’t afford domestic help in America could now afford a live-in maid, thanks to the exchange rate. Women like Rosa Johnson were expected to provide childcare and extended housework for a nominal fee (Lipman 100); the US Navy’s Guide to Living implored Americans not to pay their domestics high wages, lest they become spoiled.

Yet, some Cuban workers continued to cross the border into GTMO for work, even though Castro’s regime confiscated wages and required regular strip searches. Workers’ perseverance, even in the face of these outrageous invasions of privacy, speaks to the desperate times they must have been facing back in Cuba. Some workers, like Dennis Miller’s mother, chose permanent exile over Communist Cuba. Today, her son’s predicament is a legacy of Cold War relations between the US and Cuba. His uncertain political status makes us ask, where exactly is Guantánamo Bay, and why does the US still control it?

Though decades have passed since the unspoken tensions of the 1960s, the legacy of the era lives on in people like Dennis Miller. His extralegal status closely parallels that of post 9-11 political prisoners held in GTMO; by virtue of geography, neither resides in a place where clearly defined rights are a reality.

By bringing Guantánamo Bay’s entire history––legal, social, political, and economic––to a broader audience, perhaps we can facilitate dialogue about where best to go from here.

–Posted by Emily Lassiter, M.A. Candidate at the University of North Carolina at Greensboro

The University of North Carolina as Greensboro is participating in the Guantánamo Public Memory Project‘s National Dialogue and Traveling Exhibit. Opening at NYU’s Kimmel Center for University Life Windows Gallery in December 2012 and traveling to 9 sites (and counting) across the country through at least 2014, the exhibit will explore GTMO’s history from US occupation in 1898 to today’s debates and visions for its future. The exhibit is being developed through a unique collaboration among a growing number of universities as a dialogue among their students, communities, and people with first-hand experience at GTMO.
Tags: Base Workers, Human Rights
Tweet

One Comment to: Guantánamo Bay: Tropical Mayberry or Extralegal Prison?

This is such an interesting and important point that you make. GTMO has so much history and so many sides. The sharp contrast of the nostalgic way that many American’s looked at the base in the 1950s and 1960s, versus that of people like Dennis Miller, are incredible. GTMO has always been such a diverse mixture of political and social forces. It’s like a whirlpool of worldwide political and legal issues where some people, unfortunately, have become trapped in its vortex.

I find the extralegal status of people in GTMO to be one of the most important issues to address and bring to the public’s attention. I agree that facilitating a dialogue of where to go from here is important. It’s important because if this can happen at Guantánamo Bay, it could potentially happen anywhere in the world.