The natural facts of this place were possibly considered a bonus as U.S. military and government efforts first weighed proximity, accessibility, and, eventually, the massive adaptation potential of the site. Grasping whatever we could claim of the Western Hemisphere didn’t depend on what the place looked like. And claims of land were never dependant on or supportive of conservation ideals. In regard to the U.S. having and keeping a base with an operational location of “nowhere,” any brownfield site, former disaster area, or other undesirable land may even have seemed more ideal than Guantánamo. Physical ugliness seems a natural connection to historical horrors. 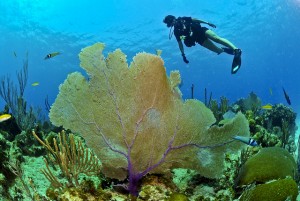 With an established naval base though, Guantánamo has in a way been saved. Without Cuba or the U.S. designating it as a national protected and preserved place, Guantánamo has been protected and preserved. Waters have not been overfished, land has not been excessively altered to the point of displacing or eradicating wildlife, and natural resources have not been consumed by tourism or soiled with its byproducts. So many parts of the natural order lost in other areas of Cuba have been allowed to continue at Guantánamo. A hidden beauty that may have been less apparent or valuable over one hundred years ago can now be uncovered. This can become the value–the resource–of Guantánamo. And it can be a resource for both Cubans and the world.

So many layers have been constructed over this more apparent value: imperialistic encroachment through treaties and leases, war and military complexes, drastic human detention, international law issues, global controversy. With such historical and current issues, it’s surprising to learn what the geography of this place is really like. With so many wrongs and so much bad, can so much beauty and good really exist? Yes, it can and does, and it’s time for a rebirth.

There’s a value in recognizing that the history of Guantánamo, with all of its scars, has produced a resource we can so easily embrace. To imagine a future and the issues and decisions we must face and make today, we must evolve beyond the past. For Guantánamo, bad has led to good.

This idea translates far beyond Guantánamo. Tragedy occurs daily, but life must move ahead. Sometimes the true story must be newly forged in settling dust, and sometimes, here, it is dramatically uncovered, revealing what a place really is about and why it must be valued.

The University of Minnesota is participating in the Guantánamo Public Memory Project‘s National Dialogue and Traveling Exhibit. Opening at NYU’s Kimmel Center for University Life Windows Gallery in December 2012 and traveling to 9 sites (and counting) across the country through at least 2014, the exhibit will explore GTMO’s history from US occupation in 1898 to today’s debates and visions for its future. The exhibit is being developed through a unique collaboration among a growing number of universities as a dialogue among their students, communities, and people with first-hand experience at GTMO.
Tags: Guantanamo Bay Naval Base
Tweet
Previous  |  Next