Examining Transparency at Guantánamo and in the Military Community 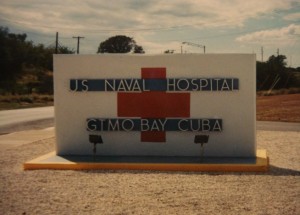 The hospital at the U.S. naval base at Guantánamo Bay, Cuba. Photo courtesy of Frances Matlock.

While reviewing the UWF history program’s collection of oral histories with individuals who have spent time serving at the US Naval Station at Guantánamo Bay, I was struck by a comment made by Pat Weathers, a woman who worked at the hospital on base in the early 2000s while her husband, Michael, was stationed there.  Weathers explained how on days when news crews were on base, those on the base were cautioned to ‘watch what they say.’ How the base handles issues of discretion is something I had never really considered, and in retrospect, it should not come as a surprise that this was emphasized. However, the fact that the individual who made the comment was not in what one might consider a traditional line of “sensitive” work was what really surprised me. This piqued my interested in what the legal discretionary standards are on the base, (which I hope to follow up on) and made me wonder how widespread they are. Do they only apply to those who work in the detention center, or are they base-wide? I am curious whether the need for nondisclosure about certain information has facilitated the development of suspicion that some Americans seem to feel toward the base, and the misperception that often arises about what GTMO, as a place, is really like.

Reflecting on this, I realized that I know little about how transparency issues are handled on military bases, and I wondered if the “watch what you say” approach is a service-wide tactic, or if there is specific attention to it at Guantánamo because of the polarized opinions surrounding it. In a broader context, I am curious if there is a blanket policy within the military about media relations and if perceived lack of transparency contributes overall to tense relations between the military and non-military members and personnel, especially in communities where there are bases. Does it create suspicion or animosity in towns where bases are located when (if at all) the community perceives that the base and its occupants are being intentionally aloof and reserved about their goings on? As a student attending university in Pensacola, FL, which hosts a military base, I find myself considering this question not only in the context of Guantánamo and the general “wider world,” but also in the case of our community in particular. It has raised questions for me about what the relationship is like here between the base and the community, especially since the base provides a large part of the county’s economic backbone. At Guantánamo, and in other cases, I wonder if there are similar economic relationships at work that may serve as a mediator for any ‘secrecy-based’ tension that arises.

I am curious how an exploration of the evolution of Guantánamo’s public relations with our nation and the international community could shed light on the wider issue of tense military-civilian relations, particularly ones that stem from this overall issue of discretion and perceived secrecy. One worker’s vaguely offhand comment about being told to watch what she said makes one consider the possibility that misperceptions between these two groups may often result from a breakdown of candid communication and transparency. An opportunity for building public memory about Guantanamo within the Pensacola community could be discussing relevant issues in Pensacola by using Guantanamo as a “case study,” providing the opportunity for community members in Pensacola to engage with issues that are meaningful to them while simultaneously raising their awareness of realities at Guantánamo Bay and encouraging them to begin formulating their own questions about the base and its role in our history. Challenges to anticipate any preconceived biases about the base, or any lack of understanding about how the issues at Guantánamo matter to us here, but these challenges are also inherently opportunities for someone who approaches the conversation with a will to help people form connections and broaden perspectives.

Considering this issue of security and privacy Guantánamo Bay Naval Station and how it may reflect a wider trend within the military could lead to meaningful dialogue about the disconnect that sometimes occurs between our civilian and military populations, what problems these cause, how they might be mediated, and what realistic benefits one could hope to see as a result of this mediation.

The University of West Florida is participating in the Guantánamo Public Memory Project‘s National Dialogue and Traveling Exhibit. Opening at NYU’s Kimmel Center for University Life Windows Gallery in December 2012 and traveling to 9 sites (and counting) across the country through at least 2014, the exhibit will explore GTMO’s history from US occupation in 1898 to today’s debates and visions for its future. The exhibit is being developed through a unique collaboration among a growing number of universities as a dialogue among their students, communities, and people with first-hand experience at GTMO.
Tags: Guantanamo Bay Naval Base
Tweet

One Comment to: Examining Transparency at Guantánamo and in the Military Community

I lived at Guantanamo Bay Naval Station for almost 2 years as an 8, 9 and 10 year old child. It was one of the parts of my childhood. The beaches, cookouts, parties, attending W. T. Sampson Elementary School (Mrs. Seay was my teacher), learning to play golf, how to ride a horse, my first “girlfriend”, playing the part of Scrooge in The Christmas Carol and attending USO shows for entertainment are the memories I have. It was heaven for a child growing up. At least it was in my mind.