Interrogation and Torture at Guantánamo

When the September 11th terrorist attacks occurred, I was a young teenager developing a personal interest in the world around me and the politics that controlled it. However, there wasn’t much to discuss in the aftermath of 9/11. President Bush had announced that “either you are with us, or you are with the terrorists,” and I certainly wanted to be with “us.” At that time, few of “us” discussed controversial topics like interrogation, torture, or how to respect human rights during the War on Terror. At school, discussions rarely focused on current events, and when they did, they glorified America’s democratic values and its exceptionalist nature. 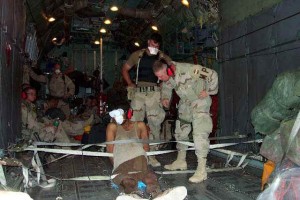 Meanwhile, the executive branch and their legal team commenced a plan to interrogate detainees at the newly designated detention facility at Guantánamo Bay, Cuba, in order to obtain important intelligence that would end terrorism and ensure domestic tranquility. These detainees, described as “unlawful combatants” by Washington, would not be entitled to protections under the Geneva Conventions, a collection of laws for international warfare that the U.S. had adhered to for more than 100 years.

A new set of interrogation principles, commonly called “enhanced interrogation techniques,” were devised to coerce information from detainees. Included on this list were techniques that constituted torture under the Geneva Conventions, including stress positions and waterboarding. Attorney John Yoo then issued the “Torture Memo” in August 2002, which defined torture only as “extreme acts” that resulted in “death or organ failure,” setting few boundaries on executive action in the War on Terror. This was followed by a December 2002 memo written by attorney William J. Haynes and signed by Secretary of Defense Donald Rumsfeld that allowed for harsh interrogation techniques such as the use of dogs, removal of clothing, and interrogations that could last as long as twenty hours. Yoo also updated his “Torture Memo,” which stated that the President could authorize the use of torture, including gouging of the eyes and disabling limbs.

A 2007 report by the International Committee of the Red Cross confirmed that torture did occur during interrogations at Guantánamo, including beatings, confinement in a box, forced shaving, and waterboarding. Despite these disturbing revelations and the ICRC’s vocal stance against torture, a 2009 Gallup Poll found that fifty-five percent of Americans thought that the use of harsh interrogation techniques on suspected terrorists was justified. How could this be so?

Ten years have passed since the first detainees arrived at Guantánamo; the discussion between “us” thus far has been limited. Torture has been trivialized, while government secrecy has created confusion. However, The Guantánamo Public Memory Project presents a reminder of the importance of remembering the challenges of recent history. The actions of the U.S. government in maintaining its global hegemony since 9/11 have real consequences for the preservation of basic human rights worldwide, and they challenge one to ask how a liberal democracy could condone torture. For “us,” it’s time to discuss interrogation and torture at Guantánamo further, so that we can lead the push to end unlawful torture practices worldwide.

2 Comments to: Interrogation and Torture at Guantánamo

You are very right that a discussion on a U.S. policy of torture is needed. This discussion should be had with the hopes of realizing the injustice and illegality of torture in order to end the policy and prevent it from happening in the future.

One bit of your blog that really struck me was the Gallup Poll that found that 55% of Americans viewed the use of torture as justified. With so many viewing the use of torture as justified, I think it is important that the discussion also include the effectiveness of torture. Many studies and professionals are now speaking out against the effectiveness of torture as a means to gain intelligence, saying that it leads to inaccurate and unreliable information, as opposed with interrogation methods that build trust and relationships.

I wonder how many people would still support the illegal use of torture if they knew that it could all be in vain– providing the U.S. military with useless intelligence and failing to protect national security. The effectiveness of torture might actually be a necessary part of this discussion if we hope to change the minds of those 55%.

You bring up some interesting points here. How could so many U.S. citizens feel ambivalent or even support the use of torture on suspected terrorists when it seems to contradict so much of what this nation believes about itself? The question of how much does one sacrifice one’s ideals and liberty for security is a hard one and I imagine there are some people believe that national security trumps individual rights. But I also think the removal of those being tortured and the physical distance from Guantanamo allows the U.S. to be indifferent towards the brutal behavior that goes on there. It’s so far away in a number of meanings that we don’t have to be confronted with torture as a reality. Hopefully this project will allow more Americans a fuller understanding of what’s taken place at Guantanamo.