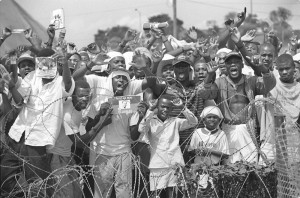 Haitians being detained at Guantánamo, Cuba while policymakers in the U.S. debate their future.

This image captures the faces of just a very few of the Haitian detainees at the United States naval station at Guantánamo Bay, Cuba. They include young and old. Their hands are raised in the air in protest of their captivity behind hurricane fencing. They are unprotected from the sun’s heat. A sign in Haitian Kreyòl reads AND WE ARE THE AVALANCHE. But who are these Haitians? And why Guantánamo?

By February of 1992, an estimated 10,000 Haitian refugees were being housed in makeshift tents at the naval station, with hundreds more on US Coast Guard ships, having been denied temporary protected status in the US. Are these the faces of the Haitian detainees in the photograph?

A few months later, in May, the US made the decision to close the refugee camp at Guantánamo, in addition, barring any ship that traded with Haiti from US ports – measures intended to support the hemisphere-wide embargo on the island’s military government. Had these Haitian refugees been photographed in their anguish, at the prospect of being extradited to a life of persecution in their home country?

By February of 1993, 250 Haitians being held at the US naval base at Guantánamo Bay, Cuba were found to have grounds for asylum but were denied entry to the US due to a George H. W. Bush administration policy barring immigrants infected with HIV. Close relatives of those infected were also detained. Many Haitian detainees began fasting to pressure a lift of the ban, but to no avail. Could these be the faces of the hungry, the neglected, and the humiliated? The faces of anger and resentment after 20 months of detainment?

Even the most specific artifacts from Guantánamo– such as this image of Haitian refugees inside the camp– have extremely convoluted meanings, as the knowledge we have about GTMO is still so very limited. To learn the real human stories behind such dehumanizing events, and to share those stories, – will cause a true avalanche.

The University of Minnesota – Twin Cities is participating in the Guantánamo Public Memory Project‘s National Dialogue and Traveling Exhibit. Opening at NYU’s Kimmel Center for University Life Windows Gallery in December 2012 and traveling to 9 sites (and counting) across the country through at least 2014, the exhibit will explore GTMO’s history from US occupation in 1898 to today’s debates and visions for its future. The exhibit is being developed through a unique collaboration among a growing number of universities as a dialogue among their students, communities, and people with first-hand experience at GTMO.
Tags: Guantanamo Bay Naval Base, Haitian Refugees, Human Rights
Tweet

The history of Guantánamo Bay Naval Base continues to amaze me the more I learn about it. I started this project knowing the origins of the US presence in Cuba, the Cuban Missile Crisis and the Bay of Pigs, and of course the ongoing controversy of it’s use as a detention camp. The interviews and readings conducted by UNCG students have allowed us to create a new side of the GTMO story. This GTMO is a tropical Mayberry, with Cold War politics and civil rights issues hiding in the shade of the cacti planted on the base’s border- a tangible reminder that GTMO was not in fact a safe haven. Now the stories of the Haitian refugees can be added to my knowledge of GTMO’s history. This post is a stark contrast to the GTMO world I have been discovering- here there are no dinner parties, no horseback riding or midnight swims- only despair, anguish, and death.
The image selected by Megan Greene gives a new meaning to the question: What is behind the Cactus Curtain? In my mind, the curtain hides an American world situated on Cuban ground, but as Megan Greene’s post indicates, behind the curtain also hides a refugee camp, its members forbidden from the American world they seek. The missing stories of Megan’s post reminds me of the thousands of stories lost in Latin American history, and the role that the United States has played in them. How can in one decade the US stand for democracy and equality, fighting a cold war against communism, and in another be more discriminatory, more undemocratic than ever before in it’s history? How can two such different worlds be contained behind one fence? I echo your question Megan, “Why Guantánamo?”
-Alexandra Latona, Master’s Candidate at the University of North Carolina, Greensboro