When first hearing about Guantánamo, I was not very interested in learning about the sire. It was not until I explored the readings, photos, and videos associated with the Guantánamo Public Memory Project that I wanted to understand more about the place the issues it represents. I learned that GTMO is more than a prison. It has been used as an American outpost in Cuba, a site of multiple refugee holding camps, as well as the infamous prison for “enemy combatants”. Even though Gitmo usually has a negative connotation through post 9/11 news, it has also been used as a ‘safe haven’ for refugees, and a place for work many tens of thousands of  Cubans and Americans. With this knowledge, I know that the possibilities are endless when it comes to the future of Gitmo. I am excited to create the “Arts of Detention” panel for the exhibition. Looking at the artwork created there has renewed my interest in researching the history and the artists. 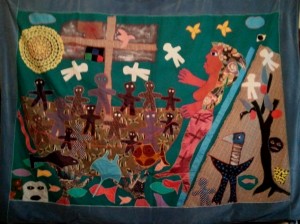 A Haitian refugee’s interpretation of the boat travel across the Caribbean that landed many Haitians at the U.S. naval base at Guantánamo. Photo courtesy of Michael Cummings.

During my research, I saw the video of the woman who had lived on the base with her family in the 1950s and 1960s. She described it as a paradise and said that those were the best years of her life. She also said that she would go back in a heartbeat if she could. Until I saw this video, I hadn’t realized that Gitmo had people who wanted to be there. They were the base workers and some refugees who had been rescued from the sea.

While looking at artwork, I tried to find something that would express what these people had felt while at Gitmo. I found a beautiful scene of a beach with bright colors that was created by a Haitian refugee. This scene, I thought, expressed everything I had thought Guantánamo was not. It seemed happy and bright with people working and sailing. This was not what I thought about when I thought of Gitmo. While not trying to interpret or put words into the artist’s mouth, I feel that this picture represents how the artist felt while staying in the camp. Maybe they were thinking of a memory or a place where they hoped to one day go, or maybe they were picturing what it would look like outside the camp. No matter what the artist was feeling or thinking when he or she made this picture, the fact is that is was made while they were detained at Gitmo.

I hope that the Arts of Detention panel can introduce more pictures like this to people who may think that Guantánamo is just a dark and gloomy prison. When they see the art that we have put together, I hope they can at least start to open up to the happier and brighter times there. I know that seeing the artwork that came out of Gitmo changed my opinion of this project. I am very glad that I had the experience to be able to research and present the images that best represent Guantánamo.

2 Comments to: Art of Guantánamo

Thank you for your post! I am looking forward to seeing the final Art of Detention panel. I think it is great that your group has chosen to include contrasting images, even though, as you mentioned, it is impossible to conclude that such images represent contrasting perspectives.

Indeed, I think that your example of a Haitian refugee’s bright and positive piece of artwork is particularly intriguing given our knowledge of the very difficult and most often negative experience of Haitian refugees at GTMO. I think it is important to consider the Art of Detention panel in the context of the exhibit as a whole, which includes a panel on the Haitian refugee experience. We can assume that many visitors to the exhibit will see both panels, and will therefore wonder about the positive image presented in this particular piece of art. I suspect that many of them will interpret the piece to be a representation of a past in Haiti, since you wrote that it includes a happy beach scene of “people working and sailing.” However, the nature of art is that neither they nor we can know for sure whether the image is a representation of life outside the base or rather is an unusually positive reaction to the artist’s detention.

However, despite the inherent ambiguity of art, I would once again stress that it is important to consider the art created at GTMO in the context of the complete history of the base. I entirely agree with you that the extremely positive memories that the project discovered are valid and should be represented, although I would argue that they are important in part because they offer a stark contrast to the other experiences at the base. The Guantánamo Public Memory Project was launch by the International Coalition of Sites of Conscience, and will hopefully, like other Sites of Conscience, open a debate about human rights at the site. You mention at the beginning of your post that after studying the history of the base you believe that “the possibilities are endless when it comes to the future of Gitmo.” It seems to me that considering why certain oral histories and pieces of art are positive while others are negative is essential to assessing the history of GTMO, and thus which “possibility” for its future we should advocate for.

Isn’t it amazing how people, places, and times aren’t as simple as we assume? I must admit that what shocked me the most upon starting this project was that (after having grown up mostly hearing of Guantanamo in the post- 9/11 context ) some who had lived on the base thought of it as a veritable utopia. I wasn’t fazed by readings on the neo-colonialism, imperialism and exceptionalism inherent in the structure of Guantanamo, or its many grey areas – I’d already heard some about that here and there. I was, however, surprised to read accounts of playing on the beaches, unlocked doors and a resident Boy Scout troop. While it was definitely not the case that everyone experienced this same wonderland (there were plenty of stories from the same time period that vouched for the fact that even at its best it was a rather flawed utopia), I think it is important to include these perspectives of seeming perfection. It’s far too easy to assume that we can guess the history of a place as something to be swept under the rug; we give our ignorance-based assumptions too much credit. To be able to begin understanding a place at a moment in time and the people who were part of it, we have to not only examine the blunders, misguided policies, and cruelties, but also its little pieces of happiness and art.
Thanks very much for your thoughtful post.

-Megan Coker, Museum Studies student at the University of North Carolina at Greensboro.