“Persons” verses “People”: How Semantic Gymnastics Have Made Guantánamo a Legal Black Hole

The naval station at Guantánamo Bay presents a number of complicated questions concerning human rights, international relations, and the United States constitution. The bay is located on the Southeastern tip of Cuba and has been leased by the United States since 1903.  The lease gives the United States sovereignty over the territory––the land is American soil––yet neither countries laws clearly apply. The semantic maneuvering and legal ballet of the past century have positioned the naval base into an unprecedented legal spot where the constitution is seemingly enforced only partially and irregularly. At the same time, since the base is in Cuba, the US country merely rents and controls the site, the US government has used and reused Guantánamo for this legal ambiguity.

Most striking for me was a court case which helped set the precedent for Guantánamo’s effective transformation into a legal black hole. The argument about whether U.S. constitutional rights apply to American controlled territories outside of the formal states pertains to a number of areas, not only the naval base at Guantanamo. In an article by Amy Kaplan, “Where is Guantanamo?” the author outlines the ill-defined space within which GTMO exists and the court decisions that have allowed the detainment of refugees from Haiti and Cuba and later suspected “enemy combatants” during the War on Terror without the recognition of rights which would be protected by the constitution. Explored in this article are a number of court decisions, including United States v. Verdugo-Urquidez, in which a suspected drug dealer’s home was searched without a warrant in Mexico following his arrest by U.S. agents. The court ruled against the extension of the Fourth Amendment to the defendant and Chief Justice Rehnquist wrote in his decision that because the Fourth Amendment used the word “people” instead of “persons” that it was applicable only to the citizens of the United States.  Kaplan writes, “He [Chief Justice Rehnquist] thus read a nationalist hierarchy of rights as already written into the language of the Bill of Rights, only some of which are applicable to the general category of ‘persons’ who are not U.S. citizens.” 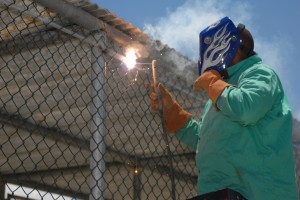 The U.S. government has exploited the legal ambiguity of its base on Guantánamo Bay Cuba to avoid providing legal protections for refugees and “enemy combatants.” Photo courtesy of Department of Defense.

This tenuous distinction between “the people” and “persons” guided following legal decisions, setting a slightly unnerving pattern of U.S. court judges deciding with occasionally inscrutable logic who gets which rights and where. These decisions chip away at the idea that some human rights are absolutely inalienable and make possible the neglected refugee camps and secretive detention centers which are now part of the U.S. legacy in Guantánamo. One can’t help but wonder after reading Chief Justice Rehnquist’s differentiation between “people” and “persons” who exactly are the people and what rights extend to all persons?

One Comment to: “Persons” verses “People”: How Semantic Gymnastics Have Made Guantánamo a Legal Black Hole

Great post! I think it is important to examine these court cases discussed in Kaplan’s article to better understand how Guantanamo Bay evolved into it’s current status as a state of exception. These cases and the conditions they have allowed at GTMO are perfect examples of how the law can be, and has been, manipulated to accommodate the interests of the powerful. You point out that, “The lease gives the United States sovereignty over the territory (at Guantanamo Bay, Cuba)…yet neither countries laws clearly apply”. The complexity of this legal black hole was one of the most surprising issues I learned from participating in this public memory project. It is astonishing to learn how a state founded on principles and laws to protect these very violations from occurring, could impose such violations onto others and then manipulate the very laws they wrote to justify their actions. As an American citizen, it feels like an extreme form of betrayal and makes me embarrassed for our nation at times, rather than proud. In the United States, laws were once written with the intend to provide order, civility, and to protect the rights and freedoms of the people, but far too often these laws, and the power they provide to their holders, are abused to feed desires for power and control. Motives that completely contradict the purpose of the laws of the United States.