On November 13, 2001 President Bush issued a military order that would forever change the socio-political landscape of Guantánamo Bay and determine the fate of detainees throughout and beyond the War on Terror. Titled “Detention, Treatment and Trail of Certain Non-Citizens in the War Against Terrorism,” this act disregarded the role of international and domestic courts established in previous presidential terms, and assigned authority to the Department of Defense. Karen Greenberg’s chapter, World Gone Wrong states the order bypassed procedures of legislative checks and balances. The mandates point to how detention sites such as Guantánamo allow social control to be depersonalized and easily managed by the state. Guantánamo, as a space, and the refugees and detainees who occupy it are legal pawns — their identities are ambiguous and in constant limbo. They become subaltern identities, existing outside the hegemonic power structure of the imperial motherland, the United States. I am continuously shocked by how easily an executive order can render individuals systematically powerless. 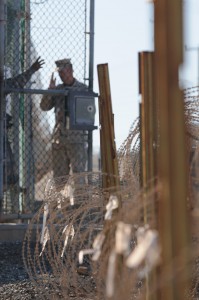 A soldier salutes through chain link fence at Guantánamo. Photo courtesy of Department of Defense.

How do we address these silenced histories and challenge these imperial nodes of power? We are so afraid to untangle, let alone explore the messy, legal predicament related to Guantánamo’s century-old lease with Cuba, and the unconstitutional legal barriers for immigrants, refugees, and “enemy combatants” that have been detained there. Part of the issue is that these imperial centers continue to reassert power because they are rarely challenged. Similar to when the Bush administration issued executive orders mandating indefinite detention and “enhanced interrogation” techniques – many stayed silent when they could have spoken. Even members of the administration’s cabinet that earned wide public support for their values and character before they joined Bushes cabinet like Colin Powell and Condeleeza Rice supported and enforced the covert legal structures that have become central to the post-9/11 surveillance state. The outcome of remaining silent costed many lives, and mandated the re-building of Guantánamo as a site of detention, violence, and injustice.

In addition to Guantánamo’s state as a symbol of the US government’s post-9/11 national security paradigm, what other issues surround the site that warrant public engagement? When we are confronted with contested histories like the ones surrounding this site, we also need to identify the issues that are uncomfortable to engage and realize the we can not afford to make the choice to remain silent.

Silence is a reactions that can offer a starting point to understanding how we, as citizens, are affected by American imperialism. I wonder to what extent American imperialism is masked by various social practices – things we cannot see, but are performed on a daily basis. Martin and Mitchelson allude to detention sites as being interconnected to political infrastructures, especially to the culture of incarceration that pervades U.S. society through its robust (and growing) prison system.  In drawing inter-relationships between power and social practice, this type of analysis can help us understand how we, as civilians in an ever-increasing, globally connected world, can spur change and impact those who are distant. Only then can we begin to unpack the complicated history of Guantánamo, to truly listen, to see and understand this history.

First misconception to fix: Guantánamo is not as far as we think. For me personally, Martin and Mitchelson’s article on geographies of detention challenged my former view of detention sites as a detached geography having a separate sense of time. I even thought that detention sites were intentionally constructed to be self-sustaining to ensure the continued silent and marginalized existence. Martin and Mitchelson’s article points to ongoing tensions and dynamics of detention sites as mobile, with the interactions of those on site as continually reconfiguring and changing the space. This conception contrasts greatly with conventional notions of detention because social rituals in daily life continuously pushes detention sites out of our imaginary and the public sphere of memory. Rather than detention sites as places that are inactive from our memory – these new interpretations represent them as the opposite – as active sites, intertwined into the fabric of American existence.

How can we begin to understand these invisible operations that occur daily? We often forget to bridge our own visceral responses, our personal narratives with those that occur on Guantánamo. A disheartening, but true fact that connects us all is that we are all subjects of American Imperialism. We need to begin accepting and admitting, and work through these responses in order to work towards a clearer understanding. What are the questions that we don’t address because we limit ourselves to our immediate experiences, our world? What emotions and thoughts do we avoid, and by doing so, what histories and memories are erased? In many ways, as citizens, as students that are beginning to unfurl this complex, multi-layered narrative, we are only beginning to explore a collective historical unconscious that has suffered systematic repression.