The Gap Between American Ideals and Actions 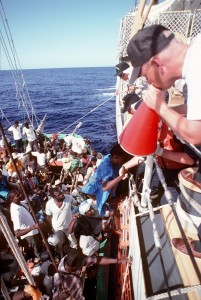 A crewman aboard the medium endurance cutter USCG MOHAWK (WMEC-913) relays instructions to Haitian refugees as they board the ship. Nearly 15,000 Haitians have been intercepted and brought aboard Navy and Coast Guard ships between October and December 1991. They are then transported to Naval Station, Guantanamo Bay, Cuba. Haitian refugees being taken to Guantánamo for temporary housing while their futures are debated by U.S. officials. Photo courtesy of Holly Ackerman.

The gross treatment of Haitians in Guantánamo remains an appalling chapter of the site’s history. It featured everything that goes against American ideals. The fact that the United States has continuously exploited the legal black hole of Guantánamo is perplexing – why would a country that espouses liberty and freedom treat people so inhumanely? Only when Americans propagate the ideals we espouse can we strengthen our interests and position in the world.

The case of Guantánamo demonstrates that the United States acts in a way that does not, nominally, go against its own ideals. When it denied Haitians immigration, it invariably declared them economic refugees instead of political refugees. This declaration suggested that Haitians do not have the right to move to the United States. On top of this, the framing of Haitians as AIDS-infected, voodoo-practicing people, suggested that their immigration will harm the right of American people. Furthermore, the deliberate location where America has abused Haitians also means that the victimhood of refugees has been largely isolated from the widespread knowledge of the general public. These examples show that the United States frames its action in a way that seemingly does not go against the principles that it propagates, which is important in that it keeps the US’s soft power strong.

Guantánamo is far from an isolated case. While the United States trumpets human rights and freedom on the world stage, it actively perpetrates human rights violations across its borders. The channeling of vast resources to the Colombian government for cracking down on human right activists is just one of the many cases in which the United States funds dictatorial regimes that follow American policies. While supporting these regimes, the United States, ironically, portrays itself as a warrior of freedom by condemning other countries for human rights violations. For example, it criticizes China for not giving Tibet enough freedom. It also castigates Russia for vetoing UN resolutions when it was the United States that has vetoed the highest number of UN resolutions. This propaganda of American ideals is important because not only does it give the US a moral high ground, but also makes its people believe that the country is practicing the American ideals. Insofar as the general public believes this is indeed the case, the United States can continue its foreign policy in a way that advances its interests even though the policy perpetrates actions that violate the American ideals of liberty and freedom.

Of course, America is not the only country that places its interests ahead of justice. The only difference between America and other countries is that other countries use different tactics to ensure that they can get away with doing whatever is in their interests: the US creates the impression that it cares about justice and freedom; other countries use cultural difference or other means as excuses for committing acts of injustice. Recognizing the disparity between what a country propagates and what it does is the first step to stop these injustices.

Brown University is participating in the Guantánamo Public Memory Project‘s National Dialogue and Traveling Exhibit. Opening at NYU’s Kimmel Center for University Life Windows Gallery in December 2012 and traveling to 9 sites (and counting) across the country through at least 2014, the exhibit will explore GTMO’s history from US occupation in 1898 to today’s debates and visions for its future. The exhibit is being developed through a unique collaboration among a growing number of universities as a dialogue among their students, communities, and people with first-hand experience at GTMO.
Tags: Human Rights
Tweet

5 Comments to: The Gap Between American Ideals and Actions

Guantánamo Bay Naval Station (GTMO) is indeed a powerful example of the United States (US) history of failing to practice what it preaches. To facilitate these actions, the US has used marginalizing labels throughout its history is to divide us (good) vs. “them” (different). Robert Orsi, Professor of Religion at Northwestern University/Weinberg College of Arts and Sciences, refers to this as “otherizing.” When a person, group or country becomes the other it has been devalued and/or demonized. This status allows the “us” to propagandize the necessity of actions that would otherwise seem unthinkable. Those actions are then just and for the good of “us.” This begs the question, “How can the story be told”? Public History is the vehicle for “outing” the other. Dialog is the voice for accountability.
The National Museum of the American Indian has not been allowed to tell the hard story the US otherizing and the American Indian people and the devastating effects of that separateness. Yet a few blocks away the Holocaust Museum is able to tell a no holds barred account of the actions by Nazi Germany. Why is that? While the United States is responsible for the actions against the American Indians, this nation is yet willing to accept this country is not always right and just.
I hopeful the “Guantánamo Public Memory Project” and its critical lens on tumulus history of GTMO will help the people of the United States to look closer it this countries history.

Guantánamo Bay Naval Base is definitely an example of the United States going against its basic beliefs. As Americans, we are brought up to believe the United States is founded on the ideas of freedom and liberty, but throughout history there have been instances of the United States falling short of its expectations. The one example from Guantánamo Bay that stood out the most to me was the treatment of Haitian refugees with HIV/AIDS. Although these people were fleeing a tyrannical regime where their friends and families had been beaten, imprisoned, and slaughtered, they were seen as enemies to the United States since they had tested positive for HIV or AIDS – two illnesses that carried a great amount of stigma during that time period. Instead of receiving proper care and treatment, these refugees were placed in a holding area with poor living conditions. They were detained indefinitely – giving them the choice to either return to Haiti and face the consequences or wait and see if the United States would allow them entrance. The US’ actions in this situation do not seem to uphold the ideas it holds true to its core. Guantánamo Bay Naval Base has become a symbol of the United States falling short of its expectations as a nation based in the protection of freedom and liberty.

This period of Guantanamo’s history was possibly the most surprising for me. I’d had no previous knowledge before this project of either the Cuban or Haitian refugee crises of the 1990’s and was shocked by the poor treatment both groups received. However I was especially horrified at the determination to prevent Haitian’s with real expectations of persecution or violence if they returned to enter the United States. I was deeply disappointed in the naming of the Haitians as merely economic refugees and not deserving of asylum when in fact many had escaped violence and I was also confused why I had never encountered this in history or political science courses. Hopefully the exhibit exposes more people to this shameful moment in time.

The United States is as you say “Of course, America is not the only country that places its interests ahead of justice.” Their actions would therefore the Haitians in difficult situation. With the treatment of these individuals to be not ideal in today’s society, is due to the fact the United States has little to gain, but has to deal with the issue of terrorism. Now, referring back to the HIV crisis this legal limbo on all individuals in Guantanamo bay Cuba gives the opportunity for the United States to pick and choose what they want to do only if they have something to gain as an outcome of the process. This crisis was dealing with human rights violations so it forced United States to take action because of the mounting pressure of other nations and the appearance it had around the world. Ronald Reagan did not address the issue of HIV until 1987, which was six years after the first report of this pressing issue that ultimately change the world. Again, going back to what you are talked about the gap between American ideas and actions the US had little to gain, but a lot to lose which was their perception around the world on the treatment of individuals.
Public history is an opportunity for all of us to take what we learned and just tell the story. It’s left up to other individuals such as ourselves to continue to open conversation to educate other individuals on what we’ve learned off history and display it in a public setting where others can understand and continue the conversation. Your article “does just that.” Letting other people know what is occurring around the world and human rights violations that occurred in Guantanamo helps all of us see the pressing need to add a voice in the decisions that are being made. I believe that this project on Guantanamo to the public educates and teaches all of us to stop looking at what we see on television and start looking at the facts that are displayed in front of us. This will move us in the direction of open dialogue and deciding a future for the space.

A striking characteristic of this incident at Guantanamo is the disconnection between American ideals and actions difficult it is to confront or overcome this disconnect. When we confront institutional hypocrisy, how do we, the American public, generate solutions for the people the government leaves behind? Working through public history provides an opportunity for recourse, especially when shaping projects and initiatives that reveal unacknowledged voices. This is the work GPMP does, and through these stories, we can see how the content on the site fits into the context of what happened. Not only does GPMP show that “recognizing the disparity between what a country propagates and what it does is the first step to stop these injustices,” but it also contributes to actively correcting this disparity.

As you note, recasting the refugees as economic migrants and trading on fears of HIV and voodoo allowed the U.S. government to maintain its ideological stance within the understanding of the government’s protection of the American public. However, understanding the plight of Haitian refugees solely from the government’s actions and perspective is misleading. Though the legal frameworks lend power to the government’s initiative, the imbalance in the representation can start to be corrected when showcasing the human stories highlighting different perspectives in the narrative. General Walls, the lawyer Ira Kurzban, and Haitian children all voice their distinct stories on the same platform in GPMP, exemplifying a public history practice that tries to bring a balanced treatment to the issues created through imbalanced policies. Ultimately it’s a retrospective remedy to the victims of institutional hypocrisy.